“When in danger or in doubt / Run in circles, scream and shout.”

Although the source of this quotation isn’t clear—several authors, including Robert Heinlein and Herman Wouk, come up—I suspect it was probably inspired by the stock market. In any event, the disappointing employment report released this morning is sure to generate some amount of angst.

The economy was expected to expand by around 225,000 jobs in August but actually created only 142,000 (subject to later revision, of course). Almost all of the shortfall came from a drop in private jobs created. The results from the alternative household survey were even more disappointing.

Short answer: no. That said, there are some real issues to acknowledge.

Wage growth is one I’ve highlighted in the past, as is the average level of wages. Here, the news wasn’t particularly encouraging, but neither was it bad. Growth remained at the same, moderate level as the previous month—a disappointment, to be sure.

Looking at the bigger picture, though, this month’s report seems more like noise than the beginning of the end. Based on monthly job growth over the past several years, shown below, we see that the current number, while low, is very much within the range. Prior disappointments, in early 2012 and 2014, bounced back to stronger gains. 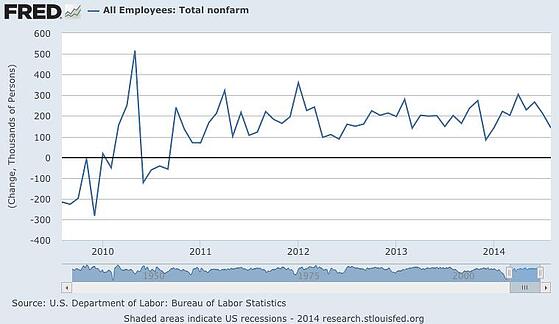 Another part of the bigger picture is hiring intentions by business, which speak more to future employment growth than one month’s numbers. Here, the results are much stronger, as shown in the chart below. 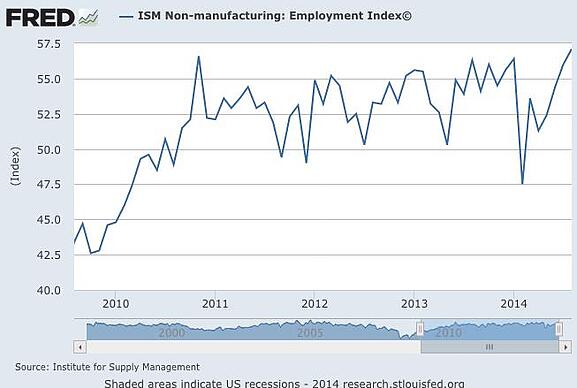 You can see that employment plans for the service industries, the largest component of U.S. employment, are actually at their highest levels in the past five years and rising, after a first-quarter drop caused by weather.

For manufacturing, the absolute numbers aren’t at multiyear highs, but they're actually slightly higher than the service numbers, and also rising. 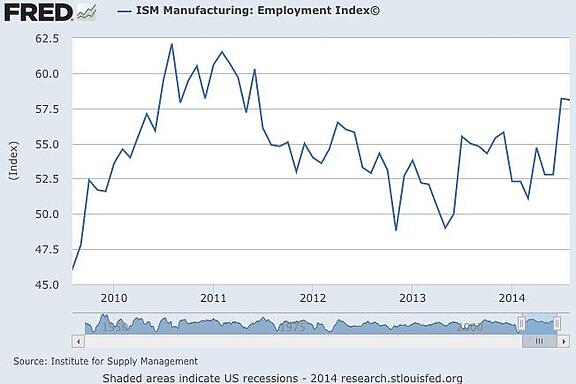 I could get into other strong economic data—auto and truck sales, rising business investment, high consumer confidence levels, and more. But just looking at the bigger picture for employment alone, the clear probability is that today's report is noise. Just as surprising good reports in the past have been noise, we’ll have negative ones as well.

So, what does the weak number actually mean?

At a minimum, it suggests that Janet Yellen and the Federal Reserve may be right in being cautious about the labor market. She has said all along that the unemployment rate is less reliable as an indicator than it has been, and this month’s 0.1-percent drop, even as job growth slowed, supports her point. Another weak number would substantially reduce the chances of an early rise in rates by the Fed.

Another month of weak data would also call overall economic growth into question. Consumer spending has already been weaker than expected, and slower job growth would both reduce income growth and make consumers more uncertain. This could result in a vicious circle of slowing spending growth driving slower employment growth.

This month’s data certainly raises the stakes for the data next month. Although it’s worth a thoughtful pause, it’s not something to worry about at the moment. Given the strength of other economic indicators, chances are, it’s a blip. Nonetheless, it will be worth watching.