“More than any other time in history, mankind faces a crossroads. One path leads to despair and utter hopelessness. The other, to total extinction. Let us pray we have the wisdom to choose correctly.” — Woody Allen

The headlines today are sounding the alarm about record-low interest rates around the world. Interest rates on 10-year U.S. Treasury bonds have hit all-time lows, as you can see in this chart—and they’ve dropped further since the last observation. 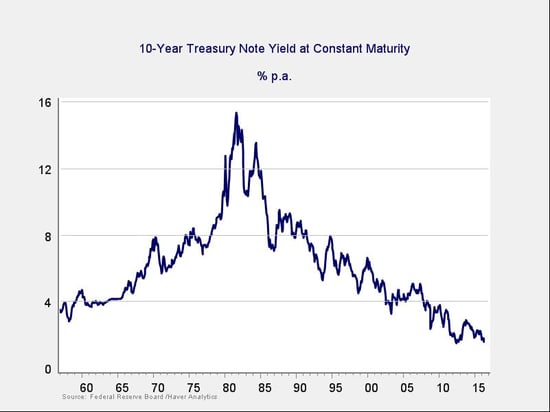 Worse, the yield curve (the difference between long-term and short-term rates) has also collapsed to very low levels. Such a collapse has often been associated with recessions, particularly when the difference is below zero, as shown in the following chart. 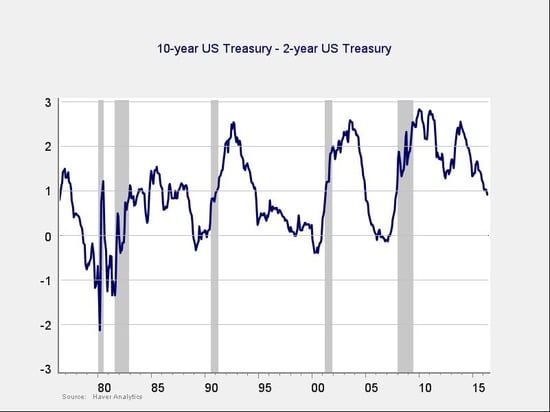 Does this kind of collapse suggest an imminent recession? Fortunately, based on history, we have good reason to conclude it’s not likely.

A look at oil prices may be instructive

The case is very similar to what we've seen with the collapse in oil prices over the past couple of years. If you remember, there was enormous concern over the implications of the oil price drop. Similar drops had led to recessions before, and the fear was that history would repeat itself. Worries had shifted from oil prices being too high (remember the call for $200 oil?) to oil prices being too low.

In fact, we did not get a recession, because the factors driving low oil prices were different than they had been in the past. In prior oil price drops, the cause had been a drop in demand, which was a symptom of a slowing economy, and we then got a recession. Most recently, demand did not drop but supply did increase substantially, pulling prices down, but for an entirely different reason. As a consequence, we did not get a recession, as the causal factor simply wasn’t there.

A reversal of the usual supply/demand dynamics

With U.S. interest rates, we have a similar but opposite situation. We've gone from deep worries about rising rates, as the Federal Reserve was expected to increase them, to deep worries about low rates. Note also that, in previous cycles, the collapse of the spread was driven partially by the Fed raising short-term rates as longer-term rates declined, driven by lack of demand for capital. This time we have the exact opposite situation.

Now, the Fed is not raising short-term rates, and the market does not expect it to do so any time soon. Now, there is very high demand for longer-term bonds, driven not by borrowers but by lenders. With rates low and even negative around the world, U.S. Treasuries look like a good deal. Just as with oil, prices are being driven by a reversal of the usual supply/demand dynamics, and consequently, the message is different than it has been in the past.

In fact, low rates continue to stimulate the economy, and the even lower rates driven by foreign demand are a sign of further stimulus rather than a slowdown. Just as with low oil prices, which were considered a warning sign but turned out to be a positive, the actual effects of continued low rates will likely dominate the psychological concerns about past behavior.

When you look at two paths, per the Woody Allen quote, it's likely that if one is bad, the other might be good. In the case of low oil prices, that certainly proved the case, and I suspect it will also be the case for low interest rates.