Rates May Rise Faster Than Anyone Expects 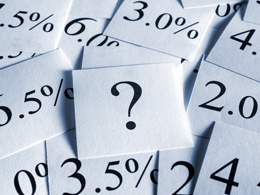 As the Trump administration gets under way, there are two major economic concerns to keep an eye on. The first is trade, which we will discuss tomorrow. The second doesn’t have anything to do with the President, at least directly. It is monetary policy—specifically, how and when the Federal Reserve will raise interest rates.

More than anything else, this is what will control the economy and markets during Donald Trump’s term.

Fed policy (and the market response) over the years

In terms of rates, we are, arguably, in unprecedented times. With short-term rates held close to zero for years, and the Fed only just having approved a second rate hike, it may not seem that rates will actually go up anytime soon. A look at history, however, shows that idea is misguided.

In the chart below, the light-blue line represents the effective fed funds interest rate, set by the Fed. The dark-blue line is the interest rate on the 10-year U.S. Treasury note, which is set in the markets and not controlled by the Fed. The chart shows not the rates themselves but how they changed over the prior year, which we can examine to see how Fed policy actually plays out over time and how the market responds.

Let’s start with the fed funds rate, the one that gets all of the press whenever the Fed meets. You can see that, over the past 30 years (at least, before the financial crisis), it bounced around quite a bit, moving between increases of 2 percent and decreases of about 4 percent on a year-to-year basis. Although the extremes represented booms and crises, even ordinary times showed bounces between +1 and –1. Ordinary volatility was actually quite high during normal times, especially compared with recent experience. Since the crisis, however, the rate has been essentially flat.

As much as we tend to overweight recent experience in anticipating the future, the fact of the matter is this: if the economy really has normalized and the Fed has finally accepted it, as it seems to have done, we should expect the future to be radically different than the past seven years. Future rate hikes should be faster and larger than expected. Even a return to the normal of the past 30 years would look pretty abnormal compared with recent experience.

Normal: more volatile than we remember?

Putting it all together, if we accept that the Fed is gradually coming to view the economy as normal and starting to move rates around as it did before the crisis—and that future long-term rate changes are very likely to be more volatile than they have been (on top of the larger changes in the fed funds rate)—then rates across the board are likely to increase by much more than they have since the crisis.

In other words, moving back to normal is good for the economy, but it stands to shake the bond markets in ways we haven’t seen in years.

These conclusions are based on Fed and market behaviors over several decades. That's before we even consider rising indicators of both growth and inflation, which will provide the causal narrative behind higher rates. As it did before the crisis, the economy will again drive decisions by the Fed and markets, a big shift from where we’ve been since the crisis.

Everyone has been waiting for the economy and markets to normalize, but we’ve forgotten just how much volatility was associated with that. Things are now moving back to normal conditions, but we may end up with some regrets about what we wished for.