Quick Hits from the Financial News 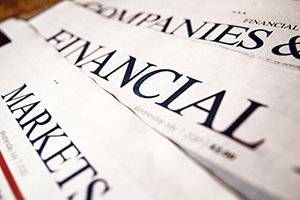 Once again, today we find ourselves with no single overarching story. But there are a couple of quick hits from the financial news worth noting. Let’s start with the headlines—literally.

Both the Wall Street Journal and the New York Times had above-the-fold stories on their front pages noting the “truce” (WSJ) and “ease trade feud” (NYT) between Europe and the U.S. The expectation seems to be that now both Europe and the U.S. have committed to working things out. All is well? I am not so sure.

First, there is no deal. Instead, there is a suspension of hostilities while the two parties try to work things out. This development is certainly positive. “To jaw-jaw is always better than to war-war,” as Churchill reportedly said. In many respects, however, it just leaves the trade conflict where I have had it all along: as more of a political cold war than an economic hot war. The real issues remain to be solved. As we have seen before, what looks like a deal isn’t necessarily final until it is signed—and maybe not even then. Hot war remains a very real possibility.

Second, while the news from Europe is positive, this discussion leaves out China entirely. Much of the trade war, as well as the supply chain problems, is between the U.S. and China. Europe has nothing to do with it. Arguably, a deal with Europe might increase the pressure on China and be helpful. But this brings us back to my first point, which is that there is no deal.

In other words, while the headlines are certainly positive, this looks a lot more like a pause than a conclusion. Trade risks remain very real. So far, markets have not really reacted. But that could change if the recent good news reverses.

Facebook disappointed on its earnings report yesterday and is down significantly today. What happened? On the face of it, this kind of drop doesn’t really make sense, as the company continues to make lots of money and to grow. What apparently changed, though, are the market expectations for future growth. Valuations for Facebook, other tech companies, and indeed the market as a whole incorporate a lot of optimism about future prospects. When news hits that actual growth might not meet those expectations, the reaction can be substantial—as we saw recently with Netflix and now with Facebook.

The questions here are whether the earlier confidence was justified and, if not, what that means for stock prices going forward. Just as in the late 1990s, the major tech stocks—today, it's Facebook, Apple, Amazon, Netflix, and Google (aka the FAANG stocks)—have moved higher based on always-rising hope and confidence about their futures. In recent weeks, we have seen two of those disappoint.

With two down, there is a real possibility that investors might start to take a more critical look at valuations, as always happens at the end of a cycle. The real meaning of yesterday’s Facebook disappointment could be the start of just that change.

This brings us to the final piece of news worth noting: Elon Musk has apparently forced one of Tesla’s critics to stop posting on stock research site Seeking Alpha. Musk (as one of the highest-flying entrepreneurs) and his companies have benefited hugely from the same confidence that buoyed the FAANG stocks. While Tesla critics have been around since the start of the company, they have never really been a serious problem. Now, however, it appears they warrant personal intervention from the CEO. Just as with Facebook, this may be a sign that confidence is indeed starting to become more critical.

Putting the pieces together

These are three stories with pretty much the same themes: that the rising risks are out there and that investors so far are not really taking them seriously. But that may be starting to change. Sometimes, you get more from putting the smaller pieces together than you do looking at the bigger ones. That may end up being today’s conclusion.