The thing that interests me about the World Cup—besides the chance to watch elite players going all out—is how the results totally upend the usual global stories.

Looking at the Goldman Sachs projections for the tournament, the major powers (with the exception of Germany) are nowhere to be found. Combined, the U.S. and Russia have a 1.1-percent chance of winning it all. China isn’t even on the list. Japan is, but might as well not be. Ditto the UK. 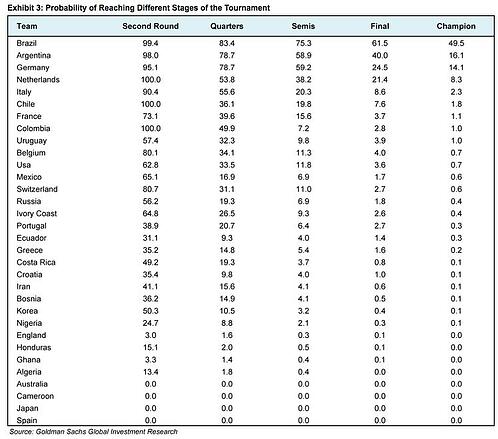 On the flip side, Brazil, massively favored, isn’t likely to outperform in the economic arena. Nor is Argentina. And the rest of the top five (again, excluding Germany) have problems of their own.

Sports and economics: it’s all about winning

Handicapping sports performance involves a wide range of economic tools, although they’re not typically thought of that way. Sports management is essentially applied economics, with cost-benefit analyses and performance metrics becoming increasingly important. Economics actually isn’t an abstract discipline, but one deeply connected with winning—at all levels. That’s what makes it so much fun.

A good illustration of this is the book Soccernomics, by Simon Kuper and Stefan Szymanski, which I just added to my reading list. Following in the tradition of Moneyball and Freakonomics, it applies economic analysis to the world’s most popular sport, explaining why the current powers dominate—and why that’s bound to change.

The U.S. defeated Ghana this year, of course, but how were they able to knock us out in the past two Cups? It’s hard to think of any other area where a large country could be regularly beaten by a small one. (As a fan, I’m annoyed to see that the U.S. has a 0.70-percent chance of winning, even though that represents real progress over previous years.) And what’s the explanation for the gap between the expected chances of Germany and France? I’m hoping Soccernomics will provide some insight.

The big question: what leads to outperformance?

Taking this back to investing, one of our ongoing challenges is identifying the factors that lead to outperformance—and staying ahead of the crowd as those factors become more widely known and followed. Conventional wisdom, in its way, limits both downside and upside. On the one hand, how can you be blamed if you failed doing what everyone else was doing? But on the other, how can you get ahead if you stay with the pack?

One of the best investment letters I’ve ever read expresses this idea better than I could. So, as I head up to Maine for a quiet weekend (which will involve watching soccer), here it is.

Enjoy, and have a great weekend.