Market risks come in three flavors: recession risk, economic shock risk, and risks within the market itself. So, what do these risks look like for June? Let’s take a closer look at the numbers.

Recessions are strongly associated with market drawdowns. Indeed, 8 of 10 bear markets have occurred during recessions. As I discussed in this month’s Economic Risk Factor Update, right now the conditions that historically have signaled a potential recession are not in place. After a weak first quarter, the economy appears to be picking up again, with healthy job growth and high levels of consumer and business confidence. As such, economic factors remain at a green light. 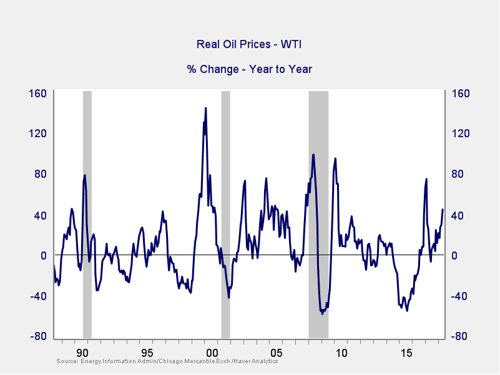 A quick price spike like we saw in 2017 (it did not appear to reach a problem level and was short lived) is not necessarily an indicator of trouble. The subsequent decline also took this indicator well out of the trouble zone. Although prices have started to rise again, the increase is still short of the trouble zone. This increase, along with recent pullbacks, suggests that while the risks from this measure are rising, they are not yet material or immediate. Therefore, the indicator remains at a green light, although we are getting closer to a high risk level. 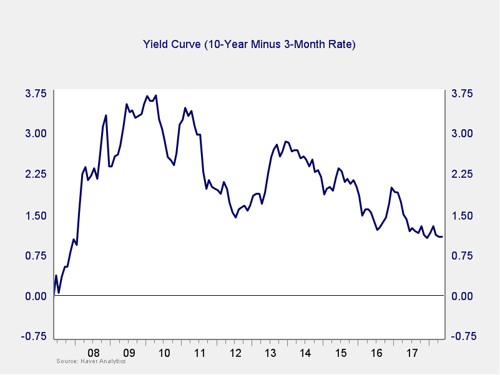 The yield curve spread stayed steady in May, leaving it close to the post-crisis low in December. It is still well outside the trouble zone, and the immediate risk remains low. The fact that the spread remains close to the lows, in combination with the Fed’s expected rate increases, suggests that this remains something to watch. I am leaving this measure at a green light for now, but you can see a shade of yellow. 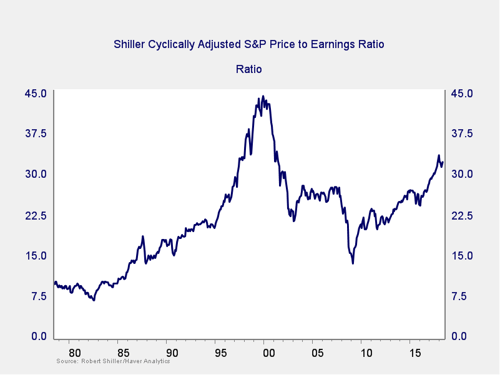 Here, you can see that when valuations roll over, with the change dropping below zero over a 10-month or 200-day period, the market itself typically drops shortly thereafter. In recent months, valuations have dropped toward the risk zone, even given the bounce back in the past month. While the long-term trend in valuations remains at a positive level, risks are rising. Therefore, this indicator remains at a yellow light. 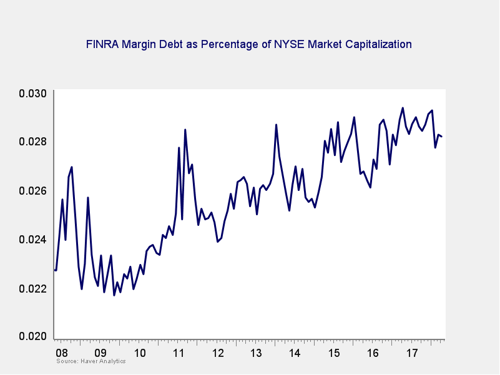 Debt levels as a percentage of market capitalization ticked down slightly last month, but they remain close to all-time highs. While borrowers have derisked somewhat in the face of recent turbulence, that process appears to have stopped well before materially reducing risk. The overall high levels of debt are concerning; however, as noted above, high risk is not immediate risk.

As you can see in the chart above, the annual change in debt as a percentage of market capitalization has ticked down in recent months, moving below zero. So, this indicator is not signaling immediate risk. But the overall debt level remains very high, and we have seen something approaching a spike in recent months. As such, the risk level remains worth watching. We are keeping this at a yellow light. 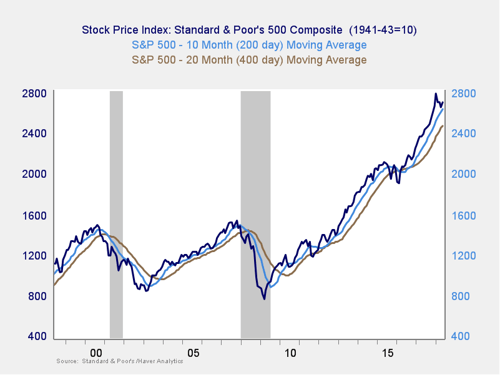 These indicators remain positive, with all three major U.S. indices well above both trend lines. As noted last month, though, the S&P 500 continues to bounce off its 200-day moving average on a daily basis, which is a sign of weakness. Looking at monthly signals, as this chart does, there has not been a sustained break. With no convincing movement either way, though, the risk of the trend turning negative has risen materially. The most probable case is that the markets may move back up, since they failed to break support even at the nadir. But given the fact that the index did hit its support level—and has not convincingly rebounded above—risks of more volatility have increased. So, I am keeping this indicator at yellow.

After taking the market risk indicator to a yellow light for the first time two months ago, markets have since recovered. This was more or less expected. At the same time, the yellow light rating recognized that risks have risen. Despite the recovery over the past weeks, those risks are still there.

While the overall economic environment remains supportive, and neither of the likely shock factors is necessarily indicating immediate risk, the continued volatility and the fact that several of the market indicators point to an elevated level of risk—combined with the ongoing policy concerns—suggest that volatility may get worse.

As such, we are keeping the overall market indicator to a yellow light. This is not a sign of immediate trouble. Indeed, the likelihood remains that the market will keep moving higher. Rather, it is a recognition that the risk level has increased materially and that, even if the market recovers, further volatility is quite likely.