This is a “special edition” of the market risk update. With the recent 10-percent pullback in U.S. markets—something we have not seen in years—the idea of market risk is a concern for many. When we do this analysis, we have to be aware of this but also keep in mind that, over time, longer-term models are better predictors than short-term results (however worrying). As such, we will look at each of our indicators and try to determine how they relate to recent experience. These special sections will be in italics.

Market risks come in three flavors: recession risk, economic shock risk, and risks within the market itself. So, what do these risks look like for February? Let’s take a closer look at the numbers.

Recessions are strongly associated with market drawdowns. Indeed, 8 of 10 bear markets have occurred during recessions. As I discussed in this month's Economic Risk Factor Update, right now the conditions that historically have signaled a potential recession are not in place. As such, economic factors remain at a green light, although risks are rising. 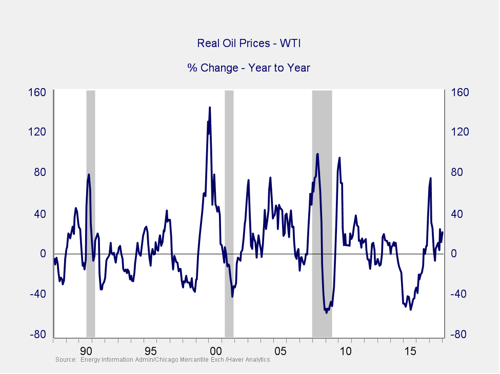 As we saw with the price spike earlier in 2017, a quick spike—it did not appear to reach a problem level and was short lived—is not necessarily an indicator of trouble. The subsequent decline also took this indicator well out of the trouble zone. That said, we have seen prices start to rise again, to relatively high levels for the period since the crisis, and it bears watching. Overall, however, there are no signs of immediate risk from this indicator, so it remains at a green light. 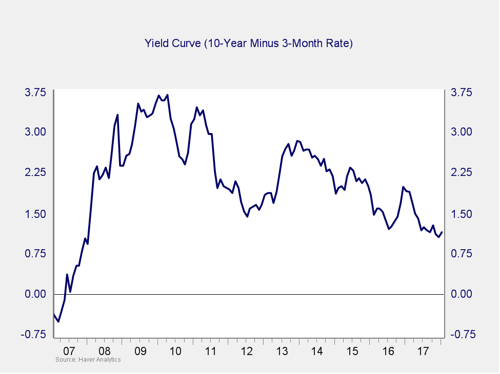 The yield curve spread opened up a bit in January, taking it away from the post-crisis low in December. It is still outside the trouble zone, so the immediate risk remains low. But the fact that it remains close to that post-crisis low, combined with the Fed's expected rate increases, suggests that caution is warranted. I am leaving this measure at a green light for now, but it is getting closer to yellow.

The economic fundamentals remain solid. Although concerns are rising, there are no signs of an imminent recession. As such, the odds of a sustained market drawdown are low. That is not to say we can’t see a further decline—we certainly may. It does say that such a decline, historically, has not lasted that long. Favorable economics support the stock market even during pullbacks.

Big-picture comment here: you will notice that the recent pullback doesn’t show up on the following charts. That is because they are done on a monthly basis, so we won’t see it until the end of February. This is not a bug; it’s a feature. I have analyzed the best time period for review. Daily is too quick, quarterly is too slow (although better than daily), and monthly is almost always best. Looking every month cuts out quite a bit of the whiplash that can result from daily review. As such, we would not process or react to signals until month-end, which is to say next month’s market risk update. We will talk a bit more about this below. 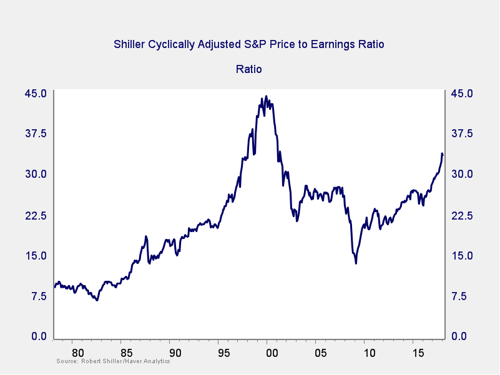 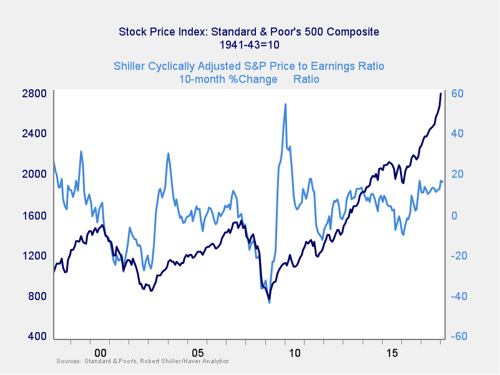 Note that valuations dropped with the market decline in early February but not enough to take this indicator into the trouble zone. If the drop persists through month-end, as discussed above, this may result in rising risk, taking this indicator to yellow. But we are not there yet. 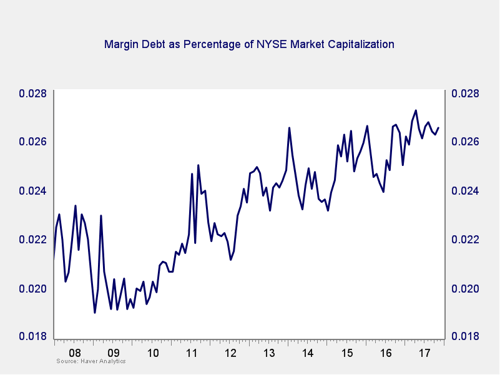 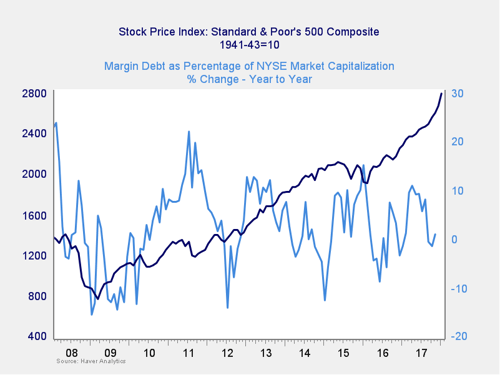 As you can see in the chart above, the annual change in debt as a percentage of market capitalization has ticked back up in the past month, but it still remains close to zero. This indicator is not signaling immediate risk. But the overall debt level remains very high, and we have seen something approaching a spike in recent months, so the risk level remains worth watching. We are keeping this at a yellow light.

Again, this is a metric that we will be taking a close look at next month. There are some signs that margin calls may have worsened the recent turbulence, but it does not appear to be a systemic problem yet. That said, this remains a risk going forward. 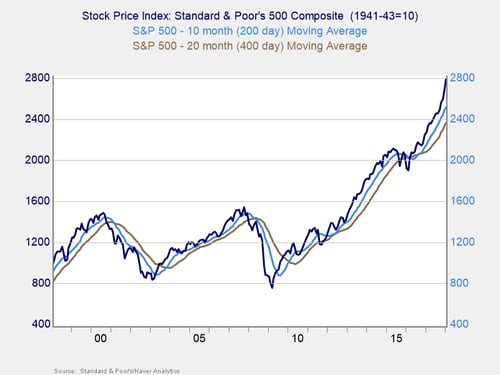 The S&P 500 actually dropped slightly below its 200-day moving average at the bottom of the recent drop, but it then bounced and moved higher. If anything, based on the data so far, this suggests that the markets are likely to move higher, since they failed to break support even at the nadir. If they had, it would not really be a worry indicator until month-end. Even then, it would be a potential concern rather than an immediate concern, given the number of false alarms from the 200-day average. Nonetheless, the fact that the index did hit its support level raises risks, so I am taking this indicator down to yellow.

The overall economic environment remains supportive, and neither of the likely shock factors is necessarily indicating immediate risk. Similarly, while several of the market indicators point to an elevated level of risk, that risk has not proven out yet. Overall, the risk levels have increased moderately—and may deteriorate further—but the market environment remains favorable in the near term.

We remain at a green light for this month. Given recent turbulence, however, a yellow light next month is a very real possibility.