I mentioned yesterday that employment numbers are much stronger than most people are giving them credit for. The one exception is wage growth, which, as a statistic, has some weaknesses.

Today, I want to talk about those weaknesses and look at some numbers that paint a rosier picture.

Wage growth, as it’s discussed in the media, is a stat that dates back to 2007, represented by the red line below. The blue line represents a similar but older data series that includes a smaller set of workers. 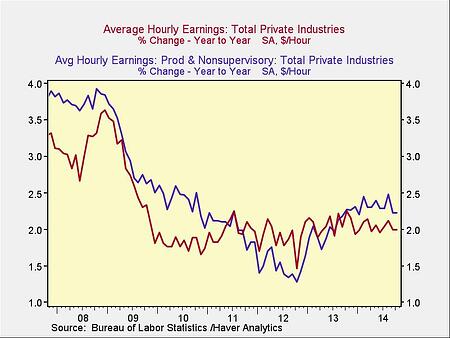 The red line, wage growth as reported, seems to track the blue line reasonably well, but it has a couple of issues.

First, it shows less variation than the blue line, which raises a question as to whether it really captures the full change in wages, both up and down. Looking at 2011, for example, the blue line dropped (which you might expect, given the crisis in Europe at the time), but the red line stayed pretty constant. Similarly, through the whole crisis, the blue line seems to better reflect reality, in that wage growth kept dropping from 2009 through 2012. The red line suggests wage growth stayed fairly steady from 2010 to the present.

The other problem with the red line is that it only goes back seven years, so we really don’t know how it behaves over time. You can see the difference in the chart below. 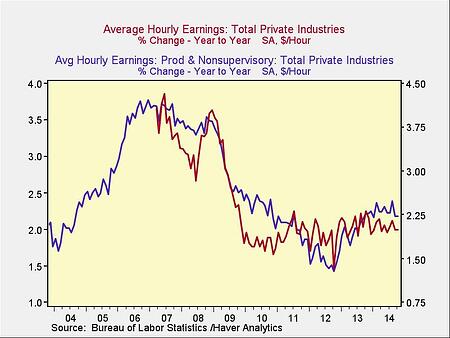 Beyond the length of the data series, though, the more fundamental question is how responsive the underlying data is to changes. The newer measure, which appears to include more salaried workers, would be intuitively less responsive than the older one, which is based more on hourly positions, with greater turnover and more frequent wage changes. As a result, the newer data series appears to be smoother on both the downside and the upside, making it less useful as a signal of changes in the shorter term.

A better indicator of what’s happening with wages

The old wage growth stat (the blue line in the charts above) is actually a better signal, as it correlates strongly with unemployment around a 12-month lag, is more responsive to changes in the short term, and shows these behaviors over a 30-year time frame.

In short, the older data series:

What’s more, the time lag between the two series suggests that, as the unemployment rate continues to decline, the upward pressure on wage growth rates is also likely to increase. In other words, the newer data series isn’t indicating sustained slow wage growth; it’s just structurally slower to react.