After the presidential election in 2016, we saw domestic small-cap outperformance through the remainder of that year and emerging market outperformance in 2017. While these two segments have garnered much attention following their strong performance, one area that hasn’t gotten as much consideration is international small-caps.

The chart below depicts revenue exposure trends in the Vanguard FTSE All-World ex-U.S. Small-Cap ETF. The pie chart in the top right shows the revenue outer ring versus the domicile inner ring. 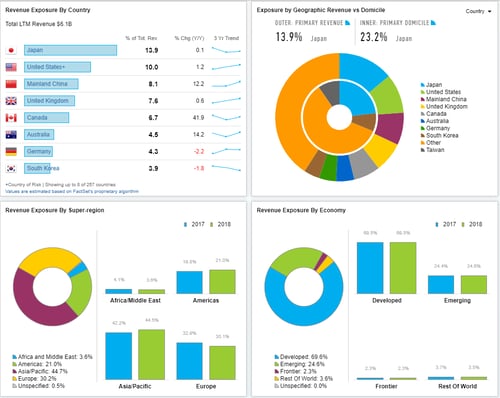 There are two major takeaways here. First, I would like to highlight U.S. exposure (top left chart) and the discrepancy between the domicile and revenue in Japan (top right chart). These both illustrate that while, traditionally, international small-caps have primarily generated revenues in their own countries and currencies, this scenario is not always the case. These figures also suggest that while smaller international companies are walled off and less affected by trade policy and the rest of the world, they are not entirely isolated. Indeed, they can be hurt if the country where their products are sold is adversely affected.

Second, I would like to point out the 24.6-percent exposure to emerging markets (bottom right chart). While we saw outperformance in emerging markets in 2017, backed by stronger profits and a tailwind from a weaker U.S. dollar, we have seen a shift back toward a stronger dollar in 2018. If we expand on these two points, we arrive at many of the benefits and risks of this segment.

After remaining relatively range bound from the start of 2015 through most of 2016, we have seen a pickup in volatility in the U.S. dollar. Depending on which way the dollar moves, the relative strength of domestic currencies and emerging market exposure can be either tailwinds or headwinds for international small-caps. In 2016, a stronger dollar supported those small-caps that were less exposed to currency headwinds. In 2017, on the other hand, a weaker dollar helped support those emerging markets with a large amount of U.S. dollar-denominated debt.

Going forward, central bank policy will be a key factor to monitor, as we have begun to see the U.S. dollar move with the federal funds rate and with hikes in the U.K. In addition, Mario Draghi, president of the European Central Bank, has stated that the ECB will end quantitative easing at the end of 2018. Further, Turkey's central bank recently refused to hike rates to strengthen its own currency. It will be interesting to see how Fed policy affects near-term corporate profits versus keeping borrowing rates low and stimulating growth. 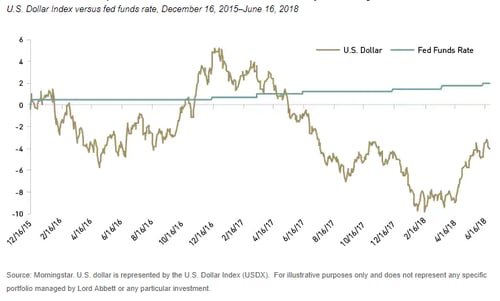 With continued outperformance from domestic stocks over recent years, we have seen some investors begin to ask, why hold international stocks?

In the chart below, we see the 3-, 5-, 10-, and 15-year annualized returns through July 31, 2018. As you can see, international small-caps have seen greater underperformance than the domestic indices over the past 10 years. But if we look at a longer time frame, such as 15 years, we see that they have historically outperformed these benchmarks, except for the Russell Midcap Index.

In the case of international small-caps, they are traditionally less exposed to changes in trade policy since their revenues are typically sourced within their country. This, along with other factors, has led to a lower correlation to U.S. stocks and attractive risk-return characteristics.

In the chart below, you can see how the category is beneficial for diversification purposes. In addition, international small-caps look cheaper from a relative valuation perspective. (Although this data is as of September 30, 2017, we believe the point still stands. This data spans 20 years and multiple market cycles.) 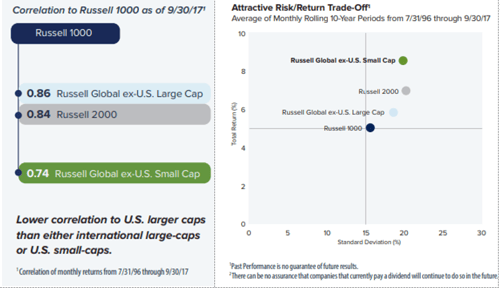 The next chart provides a comparison between the Russell 1000, Russell 2000, MSCI EAFE, MSCI Emerging Markets, and MSCI EAFE International Small-Cap indices (top to bottom). As you can see, international small-caps are near their five-year lows from a valuation perspective. 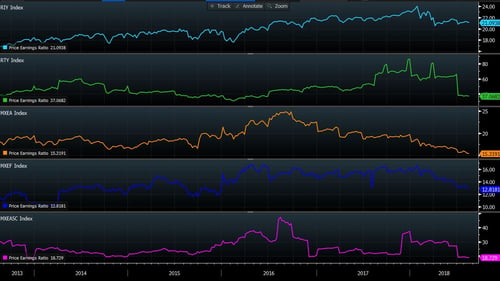 Of course, investors should make an effort to know what they own. We hope you find this overview of international small-caps helps you get to know your portfolio just a bit better.

The Russell 1000 Index consists of the 1,000 largest companies within the Russell 3000 Index. It is also known as the market-oriented index because it represents the group of stocks from which most active money managers choose.