Brad here. In the U.S., we tend to pay very little attention (too little) to what is going on in other countries, even major ones like Japan. Fortunately, we have Anu Gaggar, international analyst at Commonwealth, to keep an eye on things and let us know when to pay attention. Japan is on the verge of enthroning a new emperor, and that is something we need to be aware of. Domo arigato, Anu-san!

May 1, 2019, will go down as an epic day in the history of Japan. On this day, Japan will be drawing the curtain on the Heisei era of Emperor Akihito and welcoming the dawn of the Reiwa (“beautiful harmony”) era. Crown Prince Naruhito, who ascends as Japan’s 126th emperor on May 1, will be formally enthroned on October 22. Japan boasts the world’s longest-serving monarchy, beating Britain's Windsor monarchy by a few centuries. Like its British counterpart, Japan's dynastic family has been stripped of most of its powers, performing mainly ceremonial roles. But the iconic importance of the imperial family remains strong.

Many Japanese are drawing new hope from Reiwa as they try to put behind them the disaster, drift, and global decline of three decades of Heisei. To be sure, the Heisei era has been defined by many challenges: a sluggish economy, an aging population, and the Fukushima nuclear disaster in 2011.

The verdict is still out on whether this new page in Japanese history will be a defining moment for the Japanese economy. But there could be some near-term implications for the Japanese capital markets. To celebrate the coronation of Crown Prince Naruhito, Japan plans to have an almost unprecedented 10 consecutive days (which includes 6 business days) of national holiday called the Golden Week. 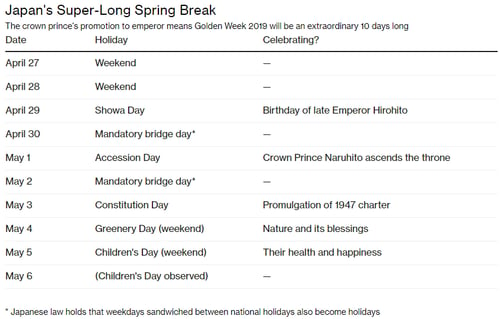 Clearly, an inability to trade could lead to financial market disruptions and increased volatility in asset markets around this extended holiday. But Japan is not new to this scenario. It recently experienced a “flash crash” of sorts when the Japanese markets opened on January 3 after the New Year holiday to a flood of orders to dump the Turkish lira and Australian dollar against the Japanese yen.

The currency markets are also frequently prone to rapid swings during the “witching hour,” the time between the close in New York and open in Tokyo—a problem that is exacerbated when one of the markets has an extended holiday. Plus, even as Japan watches as a dormant spectator, it is business as usual for the rest of the world. Japanese traders and investors will have limited ability to react to data releases elsewhere or to a potential crisis, leaving them vulnerable to market swings. This eventuality has them scrambling to “manage” their positions before the start of the holidays, which in most cases means making their positions market-neutral.

Japan is notorious for its strenuous work culture and rigid labor markets. Indeed, the country even cites “death from an overdose of work” as an official cause of death, taking the lives of many people every year. When these same workaholics are presented with a 10-day holiday, they do not know what to do with themselves, which can be a problem as well.

There are also other constituencies that are not excited about the Golden Week. Hourly workers will lose income, businesses and factories will be idle, and logistics companies may have to deal with delivery delays in a country entrenched in just-in-time supply systems. Finally, parents who can’t afford expensive vacations and have kids who are home for 10 straight days with no school or child care are not especially happy either!

Not all doom and gloom

Travel and tourism companies are gearing up for the surge in demand as the Japanese book holidays and experiences. Consumer spending may increase, including spending on Golden Week memorabilia. Wedding planners and related businesses are expected to do brisk business, with many Japanese taking advantage of the holidays and discounts offered by companies to tie their nuptial knots. Finally, demographers are waiting in anticipation to see whether the unusually long holiday leads to a spike in birth or divorce rates. Clearly, Japan can do with more of the former.

What does this holiday mean for us?

The extended Japanese holiday won’t mean much for our U.S. investments. But managers investing in Asian and Japanese assets could see some of the economic activity around this holiday play out in their holdings. The impact, if any, would likely be limited to the current quarter.

In the longer term, if the country does more than just lip service to welcome this new era, we will see changes in corporate governance and immigration policies, among others. These changes, if they materialize, would have a more profound effect on Japanese assets. For now, we need to be cognizant of a likely disruption in currency markets if a rare high standard deviation event occurs during a week when one of the largest currency markets is shut.

We certainly hope that the Japanese hopes are fulfilled and that this is indeed a new era for growth. All the best to the new emperor!