The big news today is that, after two consecutive quarters of declining growth, Japan has fallen into recession. The Japanese economy was down 1.6 percent in the third quarter, following a 7.3-percent decline the previous quarter.

To put this in context, the U.S. economy shrank by 2.1 percent in the first quarter of this year, causing great worry at the time. At its worst, in the fourth quarter of 2008, it was down 8.2 percent. In other words, Japan had a decline two quarters ago that was almost as bad as what we faced in the financial crisis, but it hasn't bounced back, as we did in the second quarter of this year.

This explains the decision on Halloween by the Bank of Japan to dial up its already large stimulus program by another 25 percent–30 percent or so. This takes the BOJ into unprecedented territory, and the measure passed on a narrow 5–4 vote—also unprecedented for the normally consensus-oriented bank. Plus, in a new development, the bank will also move to buy stocks as well as bonds. 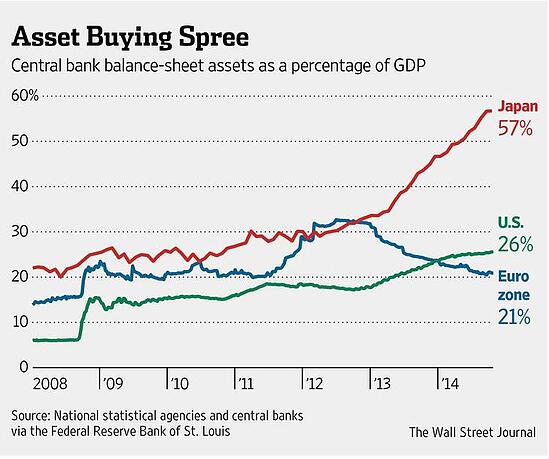 Per the chart above, Japan is already an outlier. Assets at the Federal Reserve increased from about 15 percent of GDP to 26 percent, a jump of around 60 percent, while assets at the European Central Bank have actually remained at about the same level, after expanding and then contracting. Assets at the BOJ have close to tripled over the same time period and are set to grow even faster.

What does this mean for Japan and the world?

I would argue that, for Japan, this move is a sign of desperation. The BOJ has run out of options and is now reduced to monetizing the debt in an attempt to keep the economy moving. The mismatch between the debt balance, tax receipts, and population growth pretty much guarantees this will end badly for everyone. While this kind of massive monetary stimulus may well help inflate the value of financial assets in the short term, it’s simply not sustainable over the longer term.

For the world, there will be two major issues to watch:

What about the U.S.?

For the U.S., Japan is a cautionary tale but not a vision of the future (yet). Unlike Japan, we recapitalized our banking system. Unlike Japan, the Fed implemented QE when needed (arguably) and is now starting to pull back after seeing signs it’s working. Unlike Japan, we have a rising generation, the Echo Boomers, that should rekindle growth in the next five to ten years. Unlike Japan, we haven’t dug a hole so deep we can’t see our way out (at least not yet).

The Japanese recession could be the first step in the next round of global financial instability. I mentioned the Asian financial crisis of the late 1990s the other day, and I think there are lessons we can learn from that. Here in the U.S., though, we remain relatively well positioned to ride out the storm should it show up—an important point to remember.