Is the Post-COVID Sun Beginning to Rise? 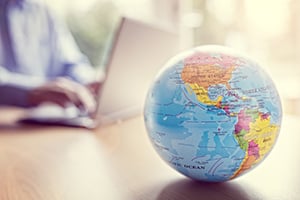 Last week, I went back into the office after what felt like an eternity. I must admit, I had never realized how much I would miss the hallway greetings, the coffee machine chitchat, and the ladies’ room gossip! My kids are back in school full-time and took the MCAS (the state assessment for Massachusetts public students) last week. Fenway Park returned to full capacity, and vaccinated fans were allowed to go without masks for the Red Sox game on May 29. It is finally beginning to feel like life is returning to normal, to what it should have been if the past 14 months had not occurred. Elsewhere in the world, progress has not been as even, but there is reason to believe that glimmers of light are beginning to appear everywhere.

The post-COVID sun has certainly risen in the U.S., but we are much further along in our journey than most other countries. I wrote a few weeks ago about how India was in the midst of a deadly second wave. A few other countries are seeing increasing infections. Fortunately, recent data shows that, with the exception of some emerging countries and Japan, the worst of the current waves may be over or near the peak, and the aggregate number of global cases has dropped sharply in recent weeks. 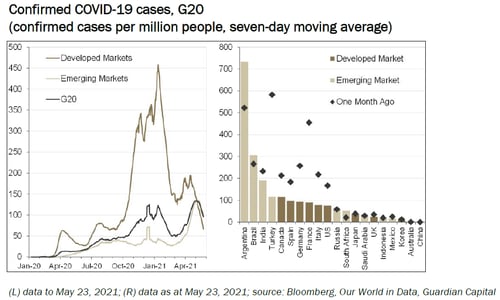 Countries with rising infections have had to impose strict lockdowns on movement and activity to mitigate the spread. But most major countries have eased restrictions. Canada, Germany, and the U.K. are outliers; cases have dropped there, but the governments have remained hesitant to lift restrictions. Nightmares of rising cases in previous episodes of lifting stringency measures are possibly haunting them. But there is reason to be hopeful: if vaccinations remain on pace, there is a real possibility that the drop in cases will last. According to data compiled by Our World in Data, about 10 percent of the world population has received at least one vaccine dose. Israel is the only country to have crossed the 60 percent mark, which is believed to be the magic number for herd immunity. More than 50 percent of the population in the U.K., Canada, and the U.S. has received at least one dose, while the number for Japan is just over 5 percent. The data remains broadly in favor of the developed world, and we need to get more jabs in the hands of emerging countries to get to the finish line. We are well on our way to COVID-19 becoming a local problem rather than a global crisis. 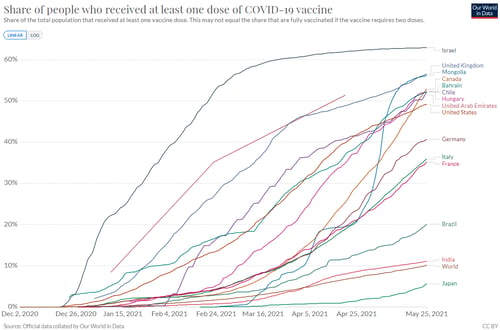 Herd Immunity Closer Than We Think?

Between those people who have previously contracted COVID-19 (and, hence, built natural immunity) and those who have been at least partially vaccinated, nearly 40 percent of the Group of 20 (G20) population can be considered immune to the virus. But there is a wide range among the countries here. Interestingly, countries that were earlier applauded for best managing the pandemic (e.g., Australia, Japan, and South Korea) are also the ones that have seen the slowest uptake in vaccines. Thus, they are now at the lower end of the spectrum in terms of virus immunity, and any outbreaks could force them into lockdowns again. 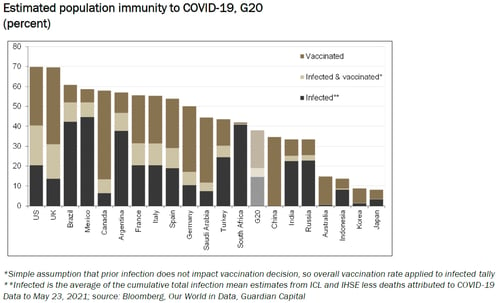 A rebound in economic activity is underway in countries that have begun to ease lockdowns. As further progress is made on the virus and vaccine numbers, previous experience suggests that recovery should continue. But in countries that have tightened restrictions due to spikes in case counts, the recovery has gone south. Thus, the underlying trend strongly suggests a global recovery, but we will continue to see bumps along the way.

Economic recovery translates into a rebound in corporate earnings, and earnings growth helps support equity prices. S&P 500 companies are expected to grow earnings by nearly 36 percent in 2021, and the S&P 500 Index is one of the best-performing major indices year-to-date. As the pandemic is brought under control in other countries and their economies recover, we will see a rebound in earnings that will support their equity prices.

Ready for Some Sunshine?

The recovery from COVID is proving to be a long row to hoe for many countries, which will lead to an asynchronous global recovery. The surge in new cases in certain Asian and Latin American countries shows just how quickly progress can unravel, at least in the short term. But the longer-term trend remains grounded in recovery, and the U.S. will lead the way in this rebound. This could very well be the darkest hour before dawn for many countries, and there will be plenty of sunny days ahead.

Personally, I am happy to return to the normalcy of a regular day at work and am looking forward to all the back-to-work celebrations because I am sure they are coming—Commonwealth never misses a chance to celebrate!