Is Japanification the New Normal?

Brad here. I have been writing about how demographics have become increasingly determinative of economic performance, especially around growth and interest rates. Today, Anu Gaggar, Commonwealth’s senior research analyst for international equities, puts these ideas into a historical and geographic context: what has happened in Japan—and what that might mean for the U.S. and for our investments. Over to you, Anu.

In Sovereign Debt Crisis, Dimitris Chorafas defines Japanification “as a term of economic plight which is neither outright bankruptcy nor much better than a hall of mirrors.” In other words, Japanification is a characteristic of an economy that has lost traction in its growth and is stuck in an extended period of low interest rates, low inflation, and high government indebtedness.

Much of the developed world is at different stages of Japanification, with Europe being the furthest along. Some emerging countries (e.g., China) could potentially follow suit. So, how should we allocate capital in a world where growth is subdued, risk-free investments (in many instances) are negative yielding, and recession could be lurking around the corner?

Deglobalization: An outcome of Japanification?

The 1985 Plaza Accord resulted in a significant appreciation of the yen, bringing Japanese exports to a standstill and abruptly halting growth. As a result, the government in Tokyo launched a series of expansionary monetary policies: interest rates were slashed, and fiscal stimulus was introduced. These measures resulted in asset bubbles, particularly in the stock and real estate markets. In a delayed reaction to the bubble burst, the Bank of Japan embarked on an unconventional path of a zero interest rate policy (ZIRP) in 1999.

But ZIRP failed to raise inflation in Japan. Europe and the U.S. have had similar experiences with low, zero, and even negative interest rates. One potential argument is that in a globalized world, competitive forces lead to loss of pricing power by companies. How can U.S. manufacturers compete with cheaper Chinese producers that have comparable scale? The current wave of trade wars and deglobalization, thus, appears to have some roots in an inability to produce inflation or a fear of deflation.

The rise of the walking dead

When the bubble burst in Japan in the 1990s, the Bank of Japan attempted to stimulate growth through rock-bottom interest rates and fiscal stimulus. This move gave birth to “zombie” companies, which were kept on life support by cheap financing. These firms are in such bad shape that they cannot even service their existing debt with their current earnings. In a well-functioning capitalist system, such companies would be allowed to go belly-up, freeing up resources from the more productive parts of the economy.

Unfortunately, sustained low rates led to a thriving population of these zombie companies, not just in Japan but also in the rest of the world. According to the Bank for International Settlements, across 14 advanced economies, zombies now number 12 percent of all publicly listed companies. The number of zombie firms in the S&P 1500 increased from 2 percent to 14 percent between 1987 and 2018, according to analysis by Bianco Research.

When we prop up an army of walking dead companies, productivity suffers and inflation remains subdued. When rates are low, such zombies fly under the radar. But if rates rise even modestly, or a recession pummels everyone across the board? A rude awakening may await such companies and their investors. Skilled active investors should be able to identify and avoid such troubled companies. But passive investors in, say, the S&P 1500 will find 14 percent of their portfolio zombified. If a wave of corporate defaults ensues, it could lead to panic basket selling, deepening a sell-off.

In 1968, the release of Paul Ehrlich’s best-selling book, The Population Bomb, percolated fears that a population bomb would tip the world into chaos. The reality that many countries face today—and that Japan has been dealing with for nearly three decades—is quite the contrary. Japan’s working-age population (aged 15-64) peaked in 1991, and the total population started to decline in 2011. Statisticians, however, continued to forecast a return to higher birth rates. That forecast led to overcapacity and deflation because companies mistakenly overinvested in the expectation of a higher population.

The next two decades will involve dramatic aging in developed countries, with Korea and China also at a turning point. As people age and retire, they spend less and save more. This dynamic pushes down prices and interest rates. Population decline can be a slowly ticking time bomb, which can be combated by allowing movement of capital and labor. If an economy is completely globalized, then even if the domestic population declines, the global population still grows. Savings from an aging economy could flow into a younger economy that can offer higher investment returns. This is not an option, however, when countries are doing exactly the opposite—closing their borders. 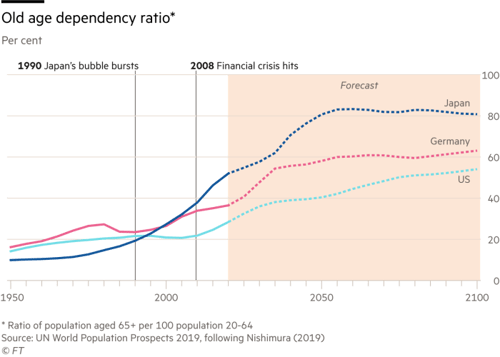 How do you invest in a Japanified world?

Sadly, Japanification to different degrees is likely the new normal for most of the world, a reality that we may find ourselves in for most of our investing careers. When investing in this backdrop, it is important to keep three points in mind.

First, when inflation is likely to remain low even as monetary policy reaches the limits of possibility, we want to find ourselves invested in companies that have pricing power that cannot be competed away. In other words, look for companies that are shielded from new entrants due to constraints (intellectual capital, policy, network effects, etc.).

Second, interest rates are likely to remain subdued in the near to medium term in most of the developed world. At such low rates of economic growth, it does not take much to tip economies into a recession. When recession hits, balance sheet fundamentals become critically important, and only the strongest survive. You do not want to be stranded holding a handful of zombies on the day of reckoning.

Third, a secular stagnation in an economy can possibly be addressed with aggressive fiscal and monetary policy. There are, of course, consequences to such measures, as we saw in the case of Japan. But a secular stagnation in population requires adaptation by the human race, which is more complex and can take a much longer time. In the meantime, businesses that adapt to or service a changing demographic will thrive, and those are the businesses that investors should consider.

Secular and competitive advantages of companies that have pricing power, have strong fundamentals, and have a business model that caters to a changing global demographic can help us navigate the maze of Japanification.