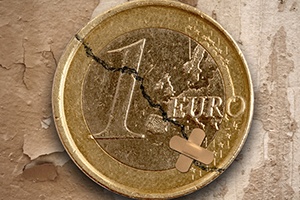 First, there was “Grexit,” which was the name given to the possibility that Greece would leave the eurozone. Then, there was “Brexit,” the plan for the U.K.’s exit from the European Union, which is actually happening (at least potentially). Now, we have “Italeave,” which I think sounds better than the other contender, “Italexit.” So what’s going on with Italy?

The rise of the euroskeptics

For those who missed it, Italy has been trying to form a government after recent elections were pretty much deadlocked. Finally, after weeks of trying, two of the parties—the Northern League and the Five Star Movement—seemed to cut a deal to form a coalition and presented a government to Italy’s president for approval. The president, rather than approving it, denied it (which is unprecedented) and instead turned to an unelected former International Monetary Fund official to try to run a nonpolitical government. This is where we stand today. It is, of course, more complicated than that, but this is close enough for today’s purposes.

What does this mean? Those of us in the U.S. can think of the Northern League as a Trump-like party, while the Five Star Movement is probably closest to a Bernie Sanders-type party. Both are antiestablishment in many ways. More important, though, neither party is committed to the European Union and certainly not to the euro currency. Indeed, the reason Italy’s president denied the new government was the euroskeptic nature of some of its members. The very real possibility that the government of a core European country could be avowedly euroskeptic was rattling markets anyway. The sudden denial and collapse of that proposed government just made things worse.

What happens next is uncertain. The technocratic government is likely to face a vote of confidence very soon. If it wins, it can then try to govern. If it loses, which is probable, there will be new elections, most likely in August. Depending on the outcome of those elections, Italy might find itself in exactly the same position as it is in right now. In other words, Italy is now in a state of political chaos—and it’s likely to stay that way for the next several months.

A very possible outcome in the next elections would be for individuals from the League and the Five Star Movement, angered by the denial of their proposed government, to vote in droves. Even people who don’t directly support these parties may do so as a vote against the anti-democratic outcome of the last elections. There is a real possibility of an even more definitive anti-Europe outcome. At a minimum, the tone of the debate just became substantially less euro friendly.

The return of market uncertainty

This is why markets were rocked yesterday—by the prospect that Italy, the third-largest economy in the eurozone, could become the first member to leave. The U.K. was bad enough, but it was not part of the common currency and hasn’t officially left yet. Italy’s departure would probably mean the dissolution of the euro—and quite possibly of the EU itself.

That’s not all, either. From a financial markets perspective, if Italy were to leave the eurozone, what would happen to its trillions of dollars in debt, which is widely held? Were that debt redenominated from euros to lira, it could bankrupt the entire European banking system, rocking financial institutions around the world. Indeed, the financial sector took a large hit yesterday on just that prospect. Imagine the Greece drama—back in 2011, 2012, and 2015—but 20 times worse. Greece was bad, but it wasn’t a systemic threat. Italy is large enough, and entwined enough in the European and global financial systems, that it really could bring the whole thing down. That is why markets reacted the way they did.

Fortunately, everyone—including the Italians—knows that, making a disaster less likely. Indeed, the League and Five Star Movement are trying today to make the coalition work again. Even if the elections happen and a more euroskeptic government is formed, most Italians continue to support the euro and the EU. Which means, even if things get bad, a way will be found to muddle through—just as happened with Greece. Markets are back up today as that sinks in.

From here to there could be a very rocky road, however. In the three Greek crises, the turbulence lasted about eight months each time, suggesting that this is only the start of a longer process. With the prospect of new elections, and the uncertainty associated with them, that time frame may be optimistic. For the rest of the year, and likely well beyond, expect to hear a great deal more about Italeave—or, as you can think of it, Greece 2.0.