Investing in Gold: Don’t Rule It Out 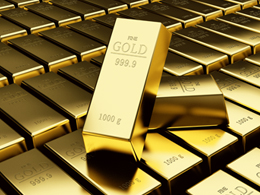 Here at Commonwealth, I’m considered the resident gold bug. In investing, that’s someone who looks to gold as a safe investment, a guarantee against systemic failures, and who is typically bullish about the price of gold.

I don’t actually fit that description, as I’m neither bullish on gold at the moment, nor do I think gold is a safe investment, nor am I a disaster buff looking to use gold as a hedge. I am, however, one of relatively few people in the firm who are even willing to consider using gold in a portfolio in a significant way.

Commonwealth is pretty typical in this. Gold isn’t generally considered a “respectable” investment, in that it is impossible to value and depends for its worth on what others will pay, rather than some intrinsic value. John Maynard Keynes, for example, referred to gold currency as a “barbarous relic.” Warren Buffett famously compared the value of a cube of all the world’s gold to 16 ExxonMobils and all of the farmland in the U.S., plus $1 trillion in walking-around money, opining that he would take the companies and the land.

Looking at the chart over the past five years, with gold at multiyear lows and dropping, it’s hard to argue with that conclusion. 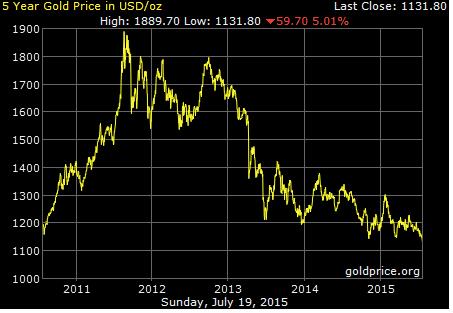 And yet, you could say the same things about every asset class at one point or another. Four years ago, gold was at an all-time high. Is it that much of a surprise that the bubble has deflated? Eight years ago, in 2007, stocks were also at all-time highs, and the bubble also deflated. Seven years before that, in 2000, the exact same thing happened with stocks. They have since recovered, and the same might happen with gold, too.

It’s all about price

The bottom line is that, in investing, price is very important. Whether something is a good buy depends largely on price. Stocks, at the wrong price, can be a bad investment. So can bonds. So can, as we see above, gold.

When pricing gets crazy, explanations pop up for why prices are really reasonable. “It’s different this time!” are the four most dangerous words in investing. For gold, the price four years ago was justified by the pending collapse of the currency system, which did not happen. For stocks in 2000, it was the new economy, which did not happen. In 2008, it was the strong housing industry, which tanked, and now it’s low interest rates, which at some point will go up.

Articles on the low price of gold can be interpreted as saying gold is a bad investment. That’s not what I take from them. My view is that, if we look at asset class pricing, gold is relatively cheap while stocks and bonds are very pricey on a historical basis.

Should you buy gold?

Probably not, unless it’s part of a thoughtful investment strategy. Certainly don’t buy it now because it’s cheap, because it could get a great deal cheaper. By the same token, don’t ignore it because it is cheap.

The thing to think about, as you read the paper, is whether the prices we see today accurately reflect current values and future trends. Underperformers are often tomorrow’s stars, and the reverse holds true. At some point, every asset class will outperform, and the prudent investor will keep an eye on all of them in order to take advantage of that.