Interest Rates: Lower for Longer, or Faster and Farther?

Two of the big economic stories—interest rates and the stock market—came together in the aftermath of the most recent Federal Reserve meeting. The Fed opted to keep rates where they are (not a surprise), but the statement and Janet Yellen’s press conference were unexpectedly dovish, suggesting that rates are likely to stay much lower than the Fed had previously indicated. The expectation dropped from four increases in 2016 to just two, which surprised and encouraged the stock market.

The Fed makes an unexpected reversal (and then reverses again)

The Fed's announcement came despite the fact that employment growth continues strong and inflation is heating up. The Fed’s responsibility is to maintain high employment (which we now have) and to keep inflation low (but not too low). With employment healthy and inflation rising, the expectation was that the Fed—with its oft-stated dependence on data—would move toward raising rates faster, not slower. This apparent reversal calls into question the Fed’s data dependency and leaves the market grasping for ways to understand how the Fed thinks.

Since the meeting, things have gotten worse. Several Fed officials have said that inflation is, in fact, rising and that the Fed might well increase rates faster than the statement implies. We now have something like a double reversal in Fed policy, all in a week. Fast work for an institution that prides itself on consensus and moving deliberately.

All well and good, but so what?

In the short run, this probably doesn't mean much for the average investor. The market, as noted above, has been encouraged by the prospect of lower rates for longer.

But in the medium term, it potentially matters quite a bit. The story goes like this: If the Fed were to do its job perfectly, it would raise rates just the right amount, slowing growth enough that inflation would never get a foothold. But since perfection isn't achievable, the Fed has a choice: keeping rates too low and then raising them faster to catch up, or raising them too high and having to cut them again when the economy slows too much.

The Fed has clearly chosen the first option, for fear that the economy is still weak. At this point, the risks of deflation and a slowing economy are much higher than the risks of inflation and an overheating economy. This is a very defensible decision, but as the economy continues to strengthen and inflation to rise, at some point—conceivably pretty soon—the Fed will have to raise rates faster than it otherwise would have. Quickly rising rates are one of the major causes of bear markets, and setting up for just that is where the Fed now finds itself.

How quickly will rates rise?

Let’s look at history. For short-term rates, once the Fed starts raising them, they go up by about 2 percent over a year, as you can see in the chart. 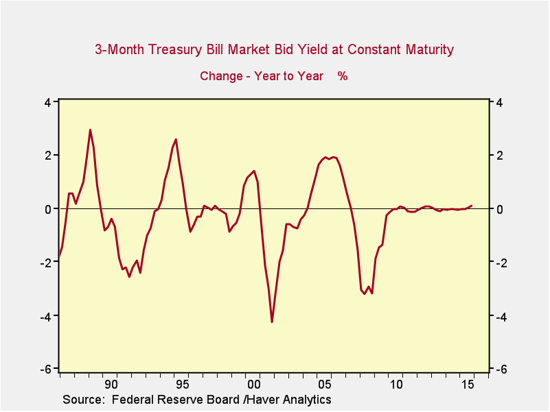 Right now, the Fed suggests only two hikes, for a ½-percent increase, for the rest of this year, and the market is only pricing in a ¼-percent increase, against historical experience of 1½ percent to 2 percent over a year.

Perhaps this cycle will be different and we won’t see that large of a hike. If so, the reason would have to be that inflation remains subdued, so let’s add that to the chart. 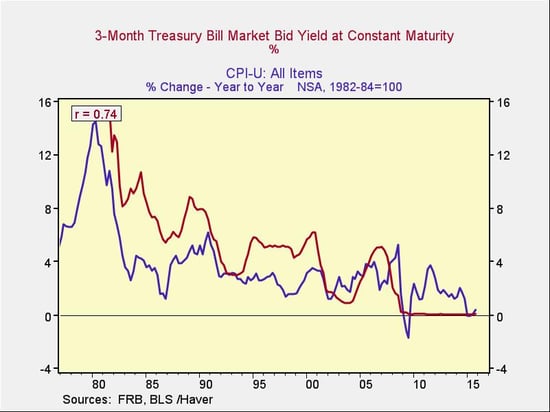 Historically, short-term interest rates have been above the Consumer Price Index, with exceptions in the early 2000s and now. With positive real rates, inflation moved down to low levels and stayed there. When rates dropped below inflation, however, inflation tended to increase, as we can see in both the 2000s and immediately after the crisis.

Although this is very limited data, it does suggest that low rates can spark higher inflation, which is an explicit goal of the Fed's policy. Based on this, it does seem quite possible that inflation will increase, potentially faster than the Fed now expects.

A possibility isn't a certainty, though, particularly given the recent decline in inflation. Whether the Fed will be forced to raise rates quickly, then, depends on whether inflation is indeed heating up, and how far that might go. We’ll take a look at that next week.