Interest Rates and the Bond Market: Why You Should Care

Over the past couple of days, the bond market has had a bit of a snit. Rates for government bonds have risen—meaning that prices have dropped—around the world.

Take a look at the rates on the 10-year U.S. Treasury in the chart below, from MarketWatch.com. 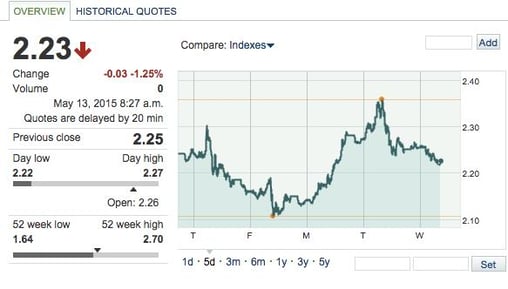 The actual change, about a quarter of a percentage point, doesn’t look like that big of a deal, particularly since approximately half of the increase has been reversed since yesterday.

Viewed from a slightly different perspective, though, we see that rates actually rose by about an eighth and then dropped back again, in the space of about 24 hours. With rates currently so low, this is a big deal, percentage-wise. And we saw even larger changes in other countries’ rates, particularly Germany.

So, what does this mean?

Interest rate volatility like this doesn’t have much of a direct effect on the average person, but the indirect impact can be substantial. Given the size of the asset classes in question (in the trillions of dollars), small changes can have major systemic effects. This is particularly true since government bonds are considered the lowest-risk assets out there, serving as the backbone of many financial institutions.

If bond prices were to bounce around significantly, it would affect the financial strength of the system. Volatility can lead to systemic risk. In fact, we can expect a lot more volatility in the future than we’ve seen so far, due to the side effects of recent, well-intentioned regulatory changes.

The most significant of these, Dodd-Frank, makes holding trading inventories of bonds more expensive for banks, with the expected result that banks now have much smaller holdings, reducing their risk from price swings. Here’s the problem: with banks much less willing to act as market makers, to provide liquidity to the markets in times of stress, prices may swing more wildly, as we’ve just seen.

What happens when rates rise?

With interest rates (and, consequently, bond prices) at or close to all-time lows, the ability of prices to adjust as the Federal Reserve starts to raise rates will be crucial. A smooth market adjustment is no news; a bad one would be big news.

This is why the recent bond market turbulence is important. It's the first real signal that reduced market liquidity may indeed result in a rough ride for bond prices. Fortunately, the problem is on the radar of everyone in the financial world, and the events of the past couple of days will only intensify that focus.