In the News: The Fed and GDP Growth

In the past 24 hours, there have been two pieces of news that tell us a great deal about the economy today and also show us how things are likely to evolve over the next year or so.

The Federal Reserve’s meeting wrapped up yesterday, and the statement summarizing its conclusions was released at 2:00 P.M. These pronouncements are always pored over and parsed like Holy Writ, as the authors know perfectly well, so every word has meaning. In fact, several key words changed this time, and we can draw some conclusions about what the Fed is thinking from them.

The first is the addition of some to the statement “some further improvement in the labor market” is needed. As Ned Davis Research puts it, “This suggests we have seen a lot of progress and don’t need to see much more.” Additional changes that support this interpretation include the description of job gains as “solid” and unemployment as “declining” rather than having “remained steady,” as in the last statement.

As I read it, the Fed clearly feels better about the labor market, which has been one of the major concerns. It sounds as if the committee continues to lay the groundwork for a rate increase in September, although they left themselves an out in the form of inflation worries and continued mention of the data-dependency of any decision.

One of the key pieces of data that the Fed looks to, of course, is how fast the economy is growing. Released this morning, GDP growth for the second quarter came in at 2.3 percent, slightly below expectations of 2.5 percent, but first-quarter growth was revised up from −0.2 percent to 0.6 percent. As a result, growth for the first half came in slightly above expectations, including the revision.

The commentary on this has bounced around between disappointment over the Q2 shortfall and excitement over the Q1 revision. Neither matter that much in the long term.

Let’s look at GDP growth in two ways: first, on a quarterly basis and then on a year-to-year basis.

Quarterly: You can see that economic growth has ranged between −2 percent and 5 percent for the past five years, with an average of around 2 percent, which is right where we are. Growth has not been consistently accelerating, but it hasn’t been consistently dropping off either. 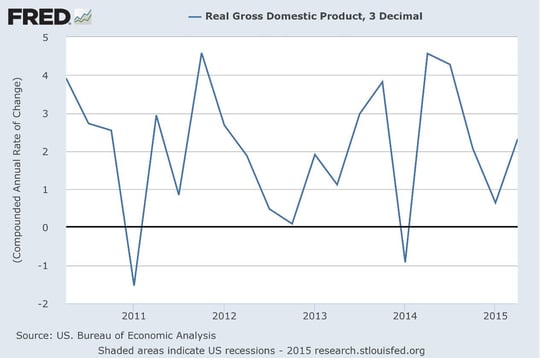 Year-over-year: Here, we see much the same trend, but we also see an acceleration of growth over the past two years, which, at least for the moment, is on hold. 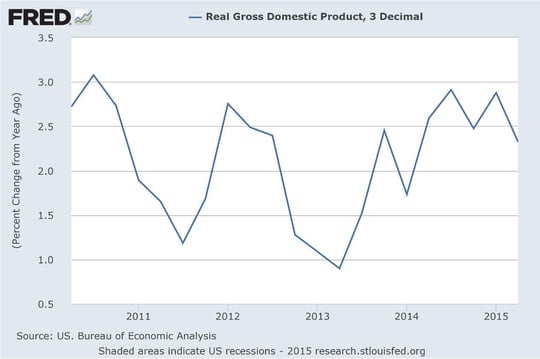 If I were the Fed, this data would suggest an economy that is steadily, if slowly, growing, despite all of the headwinds over the past couple of quarters.

Slow and steady isn’t so bad

Slower growth means steadier growth, and potentially more sustainable growth. Given this pace of growth, the Fed will be able to raise rates slowly and steadily, which is what it ideally aims to do.

So, we have steady, if slow, growth, that is unlikely to create the kind of imbalances or overheating that can provoke a recession. And we have a Federal Reserve that continues to be very stimulative but has finally reached a point where it can start to normalize rates. Over the next couple of years, we’re looking at an environment of sustainable growth and continued, albeit diminishing, stimulus.

I can think of worse places to be.