Impeachment Means Nothing for the Markets 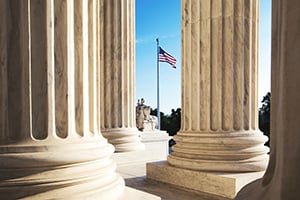 This morning, the U.S. House Committee on the Judiciary voted to advance two articles of impeachment against President Trump to a vote by the full House of Representatives. The forthcoming event will mark only the fourth time in U.S. history that the full House has been set to consider impeaching a president. If, as is likely, the House votes to impeach, the trial will take place in the Senate, where President Trump is expected to be acquitted. Although this political shock from Washington, DC, has been widely anticipated, it’s still driving headlines now that it has occurred. But, despite the frenzy, it’s an open question whether we should care. As citizens, we certainly should. As investors—no.

The impeachment process has been underway for months, generating headlines all along the way. Yet it hasn’t derailed the economy or markets, both of which have shown continued slow growth. From an economic standpoint, impeachment simply hasn’t mattered—and it isn’t likely to. Investors look at fundamentals—economic growth, earnings, labor costs, and so forth—and none of these factors has been affected by impeachment. Looking at the risk this way, I think it makes sense that the markets have not been derailed by the impeachment process.

Historically, the case has been different in the short term. Previous impeachments have rattled markets over limited time frames. But even so, the markets ultimately responded to the underlying economic facts. When, for example, the House Committee on the Judiciary approved articles of impeachment against President Nixon, the news knocked the markets down. Given the terrible economic situation at the time, however, that would likely have happened regardless. Similarly, the impeachment trial of President Clinton rattled the markets, but they recovered and moved higher in response to strong economic fundamentals. So, looking to history as our guide, we might well see some volatility from the pending impeachment. But over time—and not that long a time—the markets are likely to stay in line with the fundamentals, which remain positive overall.

Confidence could take a hit

If an impeachment does end up hurting the economy and markets, it will be in one area: confidence. If political dysfunction—and this risk isn’t limited to impeachment—shakes confidence, it could take a toll on the bigger economic picture. A long, drawn-out trial in the Senate could rattle individual consumers or business investors, causing harm to the economy. The more confrontational a trial becomes, the greater the potential for damage.

The likelihood of damage

The Senate recognizes the danger to the economy. Its leadership is reported to be planning a streamlined trial, if necessary, to minimize disruption. Any other course could harm incumbents of either party. So, the prospects for real damage remain limited.

Even if we do get a contentious trial, the damage would show up over time, not immediately—and we could track it through the confidence surveys. Like most economic and market news, real changes take time. They show up in the statistics, not in the headlines. The economic trajectory we saw prior to the election in 2016 is a good example. We could well see more of the same in 2020. The economic effects would not be due to an impeachment, but to the disruption created by the overall political environment.

Most likely, we will get an impeachment vote next week, but the Senate trial will be short. Whatever the outcome, it will resolve much of the current economic uncertainty due to this issue. As a result, the markets will go back to looking at the fundamentals.

And, at this point, it seems as though that’s all they should be looking at anyway.