Hong Kong Protests: Why They Matter for Investors

Brad here. Today's post on what the Hong Kong protests could mean for global investors is by Anu Gaggar, international analyst at Commonwealth. Take it away, Anu!

On August 18, hundreds of thousands of protesters braved torrential rains to descend on the streets of Hong Kong, demanding greater democracy and government accountability.

Hong Kong is a tiny speck on the world map. It is 110 times smaller than New York, with a population that is a bit higher than one-third of New York’s. Its GDP is less than one-quarter of New York’s. So, how do the internal affairs of Hong Kong affect us, more than 7,000 miles away?

For the past 25 years, Hong Kong has been ranked as the world’s freest economy by the Heritage Foundation (an American think tank). Now, the region is facing a severe political and identity crisis. Residents took to the streets on June 9 to protest the controversial bill that would enable China to extradite alleged criminals from the city. The bill was shelved, but the peaceful demonstrations quickly grew into a large, occasionally volatile, pro-democracy movement.

To understand what is really going on in Hong Kong, you may need a historical refresher. Hong Kong was a British colony for more than 150 years after the end of the First Opium War in 1842. In 1898, Britain obtained a 99-year lease for the territory from China and relinquished control when that lease expired in 1997. Hong Kong became a Special Administrative Region of the People’s Republic of China. Under the “one country, two systems” agreement, China granted Hong Kong a de facto constitution, known as the Hong Kong Basic Law. For 50 years, the Basic Law awarded Hong Kong a high degree of autonomy in all matters except foreign and defense policy. Hong Kong has the freedom to maintain its legal systems and to protest, strike, and express its own views—freedoms that are unheard of in Mainland China. One of the main drivers of the current protests is the belief that some of these freedoms and autonomy have been eroded. Protesters argue that China has not yet lived up to the promises of the Basic Law that, over time, would provide for universal suffrage (i.e., the right to vote for all adult citizens) in Hong Kong.

Economic effect of the protests

The Hong Kong protests have received ample global media coverage for obvious reasons. Hong Kong is not just a melting pot of eastern and western cultures. It is also an exceptionally competitive financial and business hub. It is a starting point for businesses and investments looking to get a foothold in Asia’s fast-growing economies. It is the seventh-largest container port in the world and the third-largest market by capitalization. Hong Kong is also a conduit for foreign investors’ access to China and China’s access to foreign capital.

The immediate effect of the ongoing protests has been on Hong Kong’s economy. The disruptions to businesses have accentuated the impact of the U.S.-China trade dispute and are taking a toll on business investment and consumption in Hong Kong. 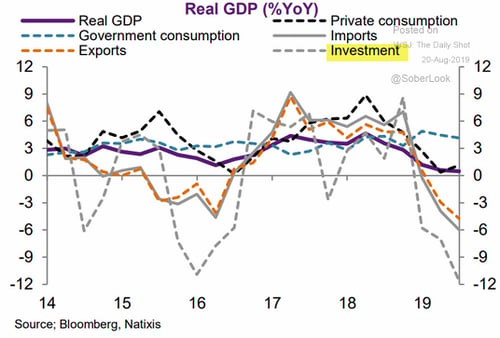 Demonstrators at the Hong Kong airport forced the grounding of nearly 1,000 flights. The airport is the world’s eighth busiest and contributes 5 percent to Hong Kong's GDP, directly and indirectly. Lost booking revenues will cost millions of dollars to the economy. Hong Kong’s equity markets have lost more than $600 billion in value since the start of the protests. A range of multinational companies—from HSBC, to Hyatt, to Disney—have pointed to the political turmoil in Hong Kong as a negative headwind during recent earnings calls. Plus, warning signs are flashing in the retail sector, where sales are expected to plunge by double-digits in July and August. According to Hong Kong Chief Executive Carrie Lam, what Hong Kong is experiencing now is worse than the 2008 global financial crisis. 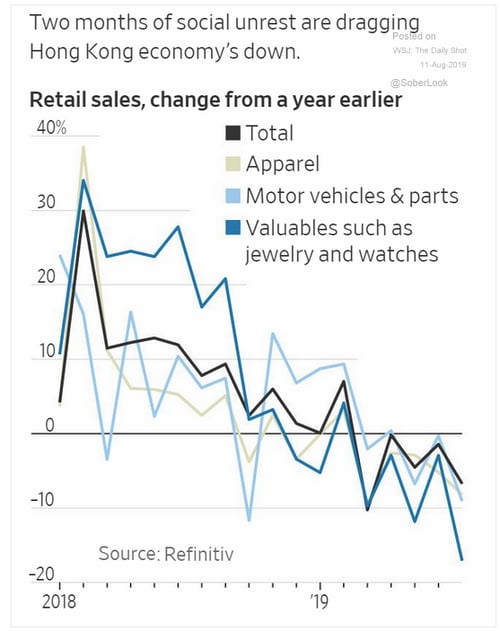 Hong Kong’s reputation on the line

Economic costs aside, the biggest casualty for Hong Kong is likely its reputation as a stable business hub. Hong Kong has long been known for its independent legal system, and the protesters want to preserve that. Ironically, the lawlessness characterizing the demonstrations is undermining Hong Kong’s reputation and is likely to make businesses, investors, and expats take pause before investing in or making a move to Hong Kong. More important, it is drawing attention to the uncertainty of Hong Kong’s autonomy when the Basic Law expires in 2047. If China intends to integrate Hong Kong, economically and culturally, the writing is clearly on the wall. Of course, as China tries to position itself as a market economy, it has been very careful about the message it sends through its policies in Hong Kong. Hence, Beijing has so far taken a very measured and distant approach to tackling the Hong Kong protests.

So, why should global investors pay attention to the Hong Kong-China tiff? Despite the broader global slowdown, China continues to be a growth engine for most of the rest of the world. Most global portfolios have significant direct or indirect exposure to China. Now, unrest in Hong Kong is unlikely to derail the Chinese economy—Hong Kong accounts for only 3 percent of China’s GDP. But Hong Kong’s equity exchange, which houses the listings of more than 1,100 mainland companies, is widely traded into by foreign investors. The Hang Seng Index has already lost more than 14 percent in value since its recent highs in April of this year and has further room to fall if foreign capital heads for the exit in droves. This indiscriminate selling could offer attractive opportunities for long-term investors. But it could also prove lethal if investors end up trying to catch a falling knife.

Global investors should be aware of the potential impact of further escalation of demonstrations and possible intervention by Beijing. China’s involvement could spark global condemnation. Much like the earlier arrest of Huawei’s chief financial officer in Canada, it could scupper U.S.-China trade talks. Thus, Hong Kong could be the wild card that may accelerate the path to prolonged trade disruptions and synchronized global recession. This turmoil is yet another risk to monitor as you factor in the recession risks in your portfolios.