Given the overarching role of the U.S. in the world economy, it is no surprise that when the Fed sneezes, central banks around the world catch a cold. During the so-called taper tantrum of 2013, the Fed’s unexpected talk of plans to slow down its bond purchase program resulted in higher interest rates and a stronger dollar, which caused the capital pipelines of emerging markets to freeze. Today, with a tenuous global recovery underway and the threat of the pandemic hanging on, central banks around the world are watching the actions of an increasingly hawkish Fed with hawk eyes (no pun intended). At the same time, we’re seeing global policy divergences as economies emerge from the pandemic environment at different speeds and face different challenges. For investors, this environment could present country-specific opportunities in fixed income, equities, and currencies.

When the pandemic shock hit economies hard, central banks applied the lessons learned from the 2008 financial crisis to avoid a repeat of history. As shown in the chart below, the major central banks across the globe simultaneously provided liquidity support to their capital markets in 2020. For the most part, these actions succeeded in preventing the global pandemic from causing a long-term economic crisis. After a brief jam-up, the global economic engine started humming once again amid news of scientists working tirelessly to find vaccines for COVID-19. 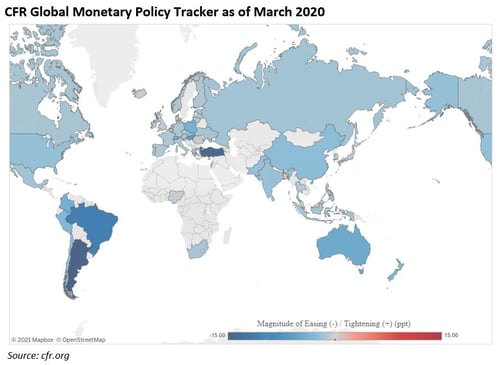 With the post-lockdown life gathering steam, it has become increasingly evident that the monetary and fiscal stimulus, along with supply chain disruptions, is causing inflationary pressures to build up. In an intertwined world, our domestic problems strangely creep up in our neighbors’ backyards, and vice versa. We have ships laden with goods sitting in ports, while some shelves in our stores are empty. Even as China is dealing with the Evergrande crisis, it is facing a power crunch— prompting the government to ration electricity just when its factories are overladen with orders from the rest of the world. In the U.K., gas prices are skyrocketing. Brazil is experiencing a century-record drought that is fueling a rise in food prices.

Hawks Beginning to Flap Their Wings

While central bankers continue to argue that these hiccups are simply transitory and the long-term trend of very low inflation remains intact, concerns are rising about persistent price pressures. And, although the Fed’s actions receive a lot of attention, central banks elsewhere are also making a hawkish shift. The Bank of England is making such a turn, and the Norges Bank was one of the first major central banks to raise rates this cycle. In emerging markets, in response to surging commodity prices and goods shortages, several banks have also raised rates in recent weeks.

Broad-based inflation has prompted preemptive rate hikes in several emerging markets, including Brazil, Mexico, Chile, Russia, and Hungary. On the other hand, South Africa, India, and Poland might hold out until next year to begin tightening policy, and Turkey and China are bucking the trend. China, in particular, has adopted a dovish stance to combat slowing economic growth and concerns of stability in its property markets.

If inflation is “transitory,” what is driving the monetary policy pivot in developed markets? It is customary for commodity prices to rise early in an economic cycle. But the central banks in developed markets generally look through these price rises, deeming them transitory. Thus, rising inflation due to higher commodity prices in and of itself may not warrant tighter monetary policies by the central banks of developed markets. In countries including the U.S. and U.K., however, there are increasing concerns of persistent supply constraints and/or labor shortages. Hence, these countries might pivot to a more restrictive monetary policy sooner than others.

In South Korea, Norway, and Canada, policy actions are warranted due to asset price stability concerns caused by rising housing prices and high household debt. In Japan and the eurozone, long-term inflation expectations are so well anchored to the floor that near-term spikes will not persuade central banks to start raising rates.

Divergences in a Post-COVID World

The global economy is emerging from the COVID-19 environment in a nonuniform way. As we can see in the chart below, the monetary policy landscape reflects this divergent phase. For investors, this environment could present country-specific opportunities across asset classes as interest-rate differentials come back into play. With more than one player in this multispeed game, investors may consider investing in a diversified global portfolio of fixed income and equity securities. 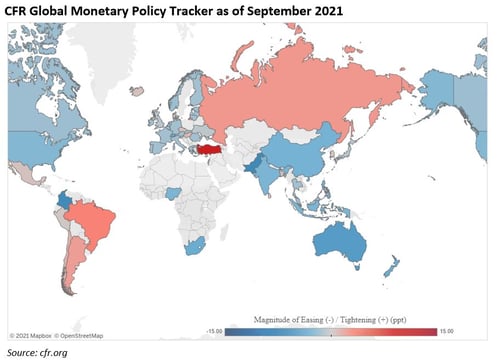