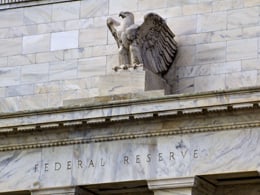 The outcome of this week’s Federal Reserve meeting was as everyone had expected: the Fed raised short-term rates by 25 basis points. The surprising part was the more hawkish tone of the surrounding commentary.

If you don’t follow this stuff regularly, here's a translation: the information the Fed released, along with Janet Yellen’s press conference, seemed to suggest that rates are likely to increase faster in the future than markets had expected. Consequently, stock markets sold off a bit, which was not a surprise, but interest rates for longer-term bonds popped up, which was.

Rates could rise at a faster clip

The real story here is that the majority of Fed committee members now expect rates to rise over the next year, as shown in the following charts. The green line tracks the committee’s average expectation for rates, and you can see the upward shift over the next two years. For the first time in a while, there’s majority support for higher rates, which suggests that the rate increase cycle really is getting under way. 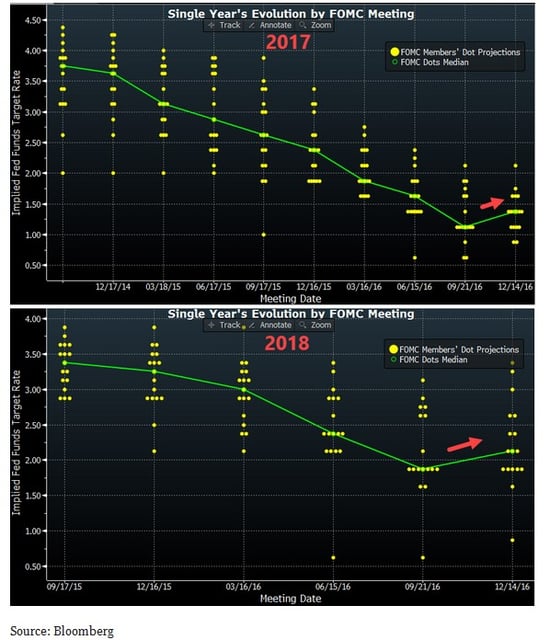 Janet Yellen’s press conference reinforced this idea. She and the committee appear confident in the current economic growth level and don’t see a need for the kind of fiscal stimulus that the Trump administration has proposed. Indeed, if you look at the Fed’s growth projections, they haven’t actually moved all that much. It is quite possible that these projections represent the Fed’s plans without more stimulus. Should that stimulus happen, rate increases could well be faster. It seems safe to interpret these numbers as the lower limit of what the Fed expects.

Bonds: In the short term, it may mean losses as higher rates drive bond prices down. We have seen this in the past couple of weeks as markets have adjusted. Over time, though, higher rates allow reinvestment to generate better returns, so the impact can be minimal. The risks involved in trying to avoid interest rate increases can also be substantial.

Given a properly diversified bond portfolio, the effects should be small over time. We also have to remember that markets move both ways, and it is quite possible that the recent upward rate trend may very well be reversed, at least partially, over the next couple of months, which would lead bond prices back up.

Stocks: Here, it’s a bit more complicated. In theory, higher rates should mean lower stock prices, and that does happen eventually. Early in a rate increase cycle, however, higher rates are actually good for the stock market. This is because rising rates, early on, signal an improving economy, and the faster growth more than compensates for the higher rates.

This is exactly what we are seeing now, as confirmed by the Fed’s analysis and Yellen’s comments. You can see the historical relationship between market returns and interest rate increases in this chart from J.P. Morgan’s Guide to the Markets. (Note that the relationship is strongest when rates are low, as they are right now.) 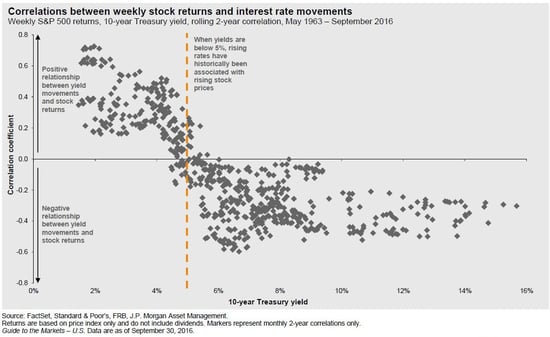 Though the Fed’s rate increase—and the likely faster pace of future increases—has rattled markets a bit, the bigger picture remains positive for both bonds and stocks. Rates have jumped but may well settle back.

At this point, higher rates are actually a positive sign for both the economy and the stock market. There will no doubt be more turbulence ahead, but the fundamentals remain positive, and the Fed’s rate increase only ratifies that fact.