The regular meeting of the Federal Open Market Committee (better known as the Fed) starts today and ends tomorrow with an official statement followed by a press conference. Markets expect the Fed to announce that interest rates will rise another 25 basis points, with 100-percent probability. Further, they are currently pricing in another couple of increases this year, as you can see in the Bloomberg chart below. 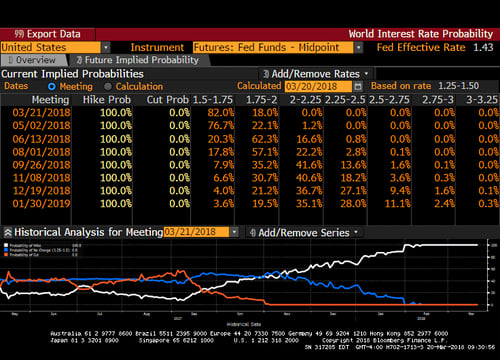 How will the markets react?

If the Fed does indeed bump rates as expected—and if the statement and especially the press conference confirm the existing expectations—then we can reasonably expect markets to rally. Markets love to think they know what will happen. For the Fed to say markets have it right, there will be cheering. One of the big reasons markets have risen as much as they have is because the Yellen Fed pretty much came out of every meeting and said what was expected.

A new chair in town

Chair Yellen, however, is no longer the boss. New Fed Chair Jerome Powell has been widely assumed to have similar policy instincts, and markets have been largely convinced that he will follow the same program. Indeed, he may. But we certainly don’t know that, and there are good reasons to believe he will be both more hawkish and less inclined to intervene in markets. That, to my mind, is one of the principal reasons why markets have gotten more volatile this year: the uncertainty around what the Fed will do.

This Fed meeting matters because it is the first with Chair Powell in charge. Before, Yellen set the tone. Now, it is Powell—and the press conference will be the public’s first look at him in this context. While he appeared in front of Congress earlier this year, this meeting and press conference represent his first live policy presentation. It should be interesting.

What are the options?

1) 25-basis-point hike. The most likely option, of course, is that the Fed will raise rates by the expected 25 basis points. If that happens, markets will be relieved. But the real question will be whether the Fed hints that rate increases will go faster, with perhaps four this year instead of three. Powell has two options in the statement and press conference. If he leaves the hikes at three, markets will interpret that to mean that Yellen has not in fact left the building. If he elects to push it to four hikes? That would be a clear signal that the new boss is not the same as the old one.

If Powell does want to make that statement—that the Fed is changing its stance—this would be a great way to do it. It would be a surprise, but not a shock. While markets would react, that reaction would likely be pretty constrained. This will be something to watch—what Powell signals for the rest of the year.

On balance, if he elects to go this route, the results should be positive. At this point in the cycle, higher rates are more a response to faster growth than rising inflation—and have historically been positive for the market. It would also be a step toward normalizing monetary policy, which has been the Fed’s goal for the past 10 years. Finally, it would help prepare the Fed to act for the next recession. All in, I suspect faster increases would be seen as positive for both the economy and markets, after the initial reaction.

2) No rate increase. There are, of course, two other reasonably possible options here. The first is no rate increase at all. This would certainly rattle markets, in that they are pricing in 0-percent chance. This would signal that the Fed sees a great deal of risk and weakness in the economy, which could rapidly become a self-fulfilling prophecy. Given what the Fed has been saying about the economy, and the good news we have seen, I have to rate this as very unlikely. It really would be a shock.

3) 50-basis-point hike. Also unlikely, but somewhat more possible, is that Powell and the Fed decide to make a much stronger statement by raising rates 50 basis points instead of 25 basis points. You can see in the chart above that markets have an 18-percent chance of this priced in, but this would still be a big surprise. It would also suggest the Fed sees growth—and inflation—to be much stronger than is currently perceived. This really would rattle markets by raising the uncertainty around both the economy and monetary policy. As such, it is unlikely. But if Powell really wants to make a statement, this would be a very effective one.

The optimal result for investors

Most likely, though, is that we will see the expected 25-basis-point hike, with a hint that four hikes are quite possible but not guaranteed. If so, it will mean that Powell is taking his time in setting out his goals but is being almost equally cautious about not rattling the markets as he does. From an investor’s standpoint, this is the optimal result from tomorrow. Let’s hope that is what we see.