Everyone’s Worried About the Boomers, but Are the Kids Alright?

A major concern of the baby boomer-dominated media, as well as the economics profession and government agencies (also dominated by boomers), has been the fate of—you guessed it—older workers, mostly boomers. How many of them are out of work and disabled, or able and willing to return to the workforce? Good questions, but hardly the only issues out there.

While I’m certainly worried about the aging boomers, my own position—right in the middle, in Gen X—makes me more concerned about the job prospects of the younger generation, who will be paying for my retirement (hopefully).

The plight of the rising generation: not as bad as it may seem

Let’s define “younger people” as the 18–24 age bracket, those who are a couple years out of high school or college, and who, in a well-functioning economy, should have jobs and be starting to build their adult lives.

To decide what “doing well” means for this group, let’s compare their position to that of young people 10 years ago, in 2004. Although the tendency is to use the peak of the boom, in 2007 or so, we now know that it was unsustainable, driven by consumers borrowing money they didn’t have to buy things they didn’t need. 2004 was five years before the meltdown—about halfway between the dot-com bust and the financial crisis. That's reasonably normal, and most comparable to today, five years after the bust.

Has employment recovered? Based on the total number of jobs, shown in the following chart, it has not. 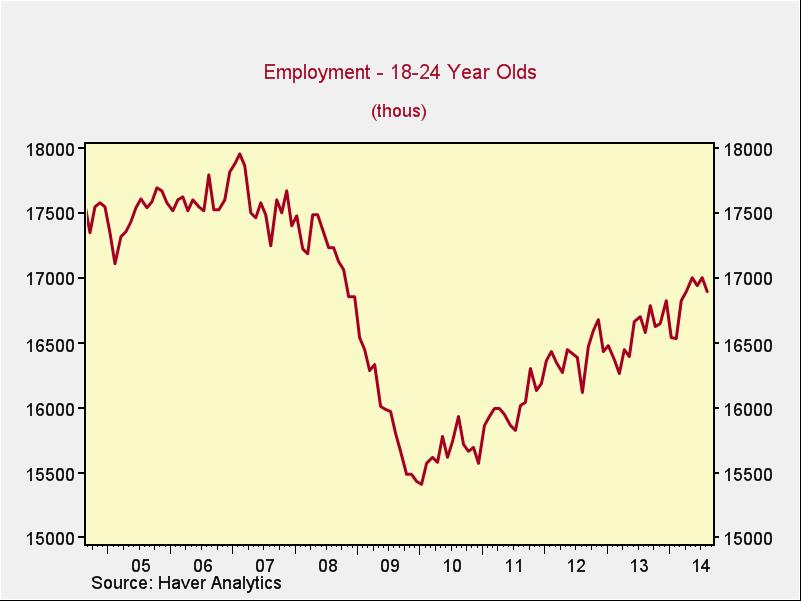 Looking at employment as a percentage of the population, we also still have a way to go. Only about a third of the jobs lost due to the financial crisis have been recovered. 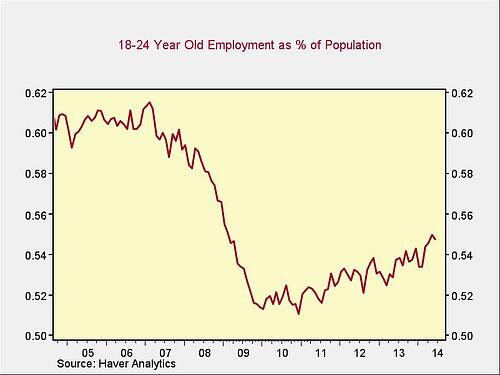 At face value, this is a rather depressing set of graphs. Anecdotally, the lackluster employment stats might be due to more people in this age group heading to higher education, rather than work. We can test this theory by subtracting those people from the 18–24 population, as follows. 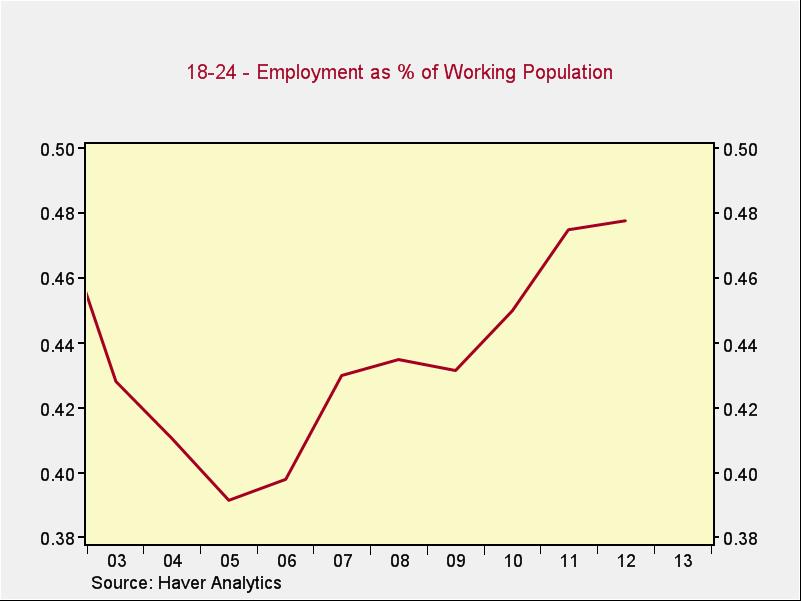 As it turns out, when you remove those who are enrolled in college, the chart shows a higher percentage of employed people in this age group than at any time in the past 10 years. Based on this data series, we haven't just recovered; we've improved.

The absolute number of jobs has not recovered, and employment in this age group as a percentage of the total is below normalized levels. But after adjusting for higher education enrollment, this may be due to a lower population of available workers.

The implications for the future are encouraging. If younger people are enrolled in college, they are making themselves more marketable and increasing their future employability, to the benefit of both themselves and the economy. They are also indirectly benefiting those without a college degree by reducing the pool of less-skilled labor.

The rising generation is not out of the woods, but we do see encouraging trends. As the baby boomers continue to age out of the labor force, these educated kids will increasingly benefit from their enhanced skills and the availability of more and better jobs.