As with the rest of the world, the COVID-19 pandemic had a devastating effect on the European economy, not to mention the continued uncertainty regarding Brexit. The U.S. and China were among the first countries on the path to economic recovery, while Europe struggled to emerge from the lockdowns and had a rough start to its vaccination program.

Now, the post-pandemic recovery is becoming more broad-based. The U.S. and China are passing the baton to Europe and a few other parts of the world. As is always the case, equity markets are forward-looking and have factored in much of the good news for Europe. But a global cyclical recovery could stretch out the good times for earnings of European companies and provide support to their equity valuations.

After a poor start, the European Union (EU) has made impressive progress on vaccinations and now has given as many shots as the U.S. In fact, 46 percent of Europe’s population (and a greater share of the adult population) have received at least one shot. The new variants are a risk and could extend the reopening timeline, but the economy has learned to adjust to restrictions. If vaccinations stay on pace, this is a manageable problem.

One positive that came out of the pandemic is that it united the 27 member states of the EU against a common enemy. It empowered the EU to make unanimous decisions for fiscal and monetary stimulus to mitigate the economic shock. The European Central Bank (ECB) was quite accommodative even before the pandemic hit and enhanced its monetary support in the face of adversity. Looking ahead, the bank is expected to remain dovish for a long time, even as the economies rebound strongly.

Fiscal stimulus disbursements to member states will begin this summer, unlocking massive government spending and investments—many of them going to green infrastructure projects. Against this backdrop, the ECB recently revised its GDP growth forecast for the region, expecting pre-COVID GDP to be hit in Q4 2021 and growth momentum to extend through next year.

European equity indices have a greater weight in sectors that are levered to economic growth, such as financials and commodity-related sectors, and a lower weight to “growth”-oriented companies. European indices are also more export-oriented than the U.S., Japan, or emerging markets; hence, a rebound in global trade and activity will be a tailwind for European recovery and for its equity markets.

European Earnings Cycle Will Be Stronger in the New Cycle

Earnings for companies in the STOXX Europe 600 Index are expected to grow at a pace of about 45 percent in 2021 and 11 percent in 2022, after having dropped nearly 30 percent in 2020. As we look further out, 2023 and 2024 earnings growth is expected to slow down, with conservative estimates of about 4 percent growth. Even at a 4 percent clip, the European profit cycle will be much stronger than in the post-great financial crisis (GFC) period, but not as strong as the cycles that preceded the GFC. 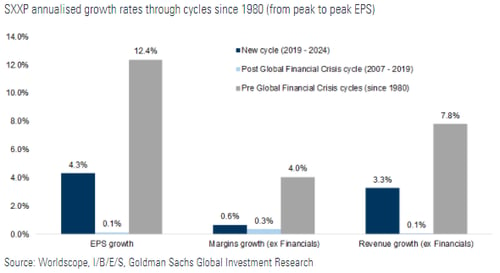 What’s Been Priced In?

The recent performance of European equities indicates that valuations have already moved in anticipation of strong earnings recovery. Before the vaccine announcement on November 6, 2020, European equity returns were lagging behind that of all other major regions, but they have outperformed since. The MSCI Europe Index is currently trading at a valuation that is higher than its 25-year average. But when European valuations, earnings quality, and earnings growth expectations are compared with those of other major developed markets (e.g., U.S. and Japan), the valuations are quite in line. The richer valuations point to modest future returns, while the stronger fundamentals provide a margin of safety. 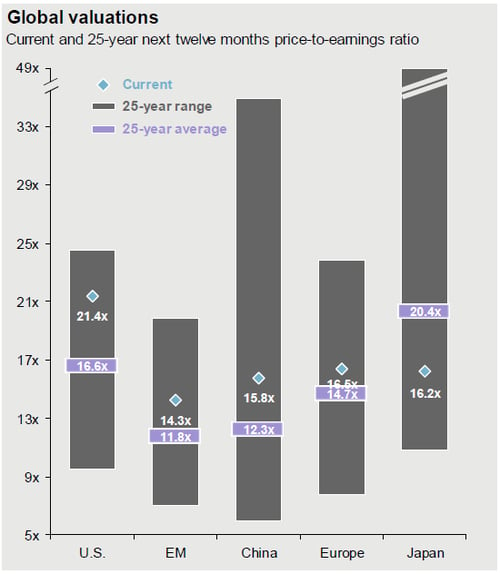 Closer to the Beginning Than the End

The European bash began in November 2020 with very upbeat dance numbers. When you consider the whole kit and caboodle of vaccinations ticking up, economic recovery taking root, fiscal spending starting to flow, recent run in equity flows, stronger earnings cycle, and higher but relatively attractive valuations, the party could go on but with more ambient music. What that means is that the low-hanging fruit has already been picked, but there is a longer runway for those that are not in a rush.

The STOXX Europe 600 Index is a fixed component number index designed to provide a broad yet liquid representation of large, mid and small capitalization companies in Europe. The MSCI Europe Index is a free-float adjusted market capitalization-weighted index that is designed to measure the equity market performance of the Developed Markets in Europe.