I hope everyone had a great holiday weekend, whatever holiday you celebrated. Unfortunately, it wasn’t a good Friday from an economic standpoint.

The employment data released last week disappointed across the board:

What does this mean?

To figure that out, we need to answer two questions. First, why was the decline in job growth so bad? And second, are those factors likely to continue?

The fact that no one saw this coming suggests we really don’t know what caused the decline. There is no obvious single reason for the disappointing employment report. Plausible candidates include the weather (this index was the sixth-worst since 1976); the West Coast port strike; the decline in oil drilling; the strong dollar hurting exports; and even just employers taking a breather after several months of fast hiring. All of these factors are probably part of the answer.

Of these candidates, the only ones that might have longer-term effects are the drop in oil drilling and the strong dollar. The others should be short term, suggesting that employment growth should rebound in the next couple of months. On balance, it seems likely that this is a one-time blip rather than a trend reversal.

Other reasons to think this report is a one-off include very low initial unemployment claims, which are close to a record low in terms of the proportion of the labor force; voluntary quits by workers at a seven-year high; an uptick in wage growth (until Friday, the most worrisome labor statistic); and generally favorable aggregate unemployment numbers.

Should we be worried about recession?

Looking at the bigger picture, we've seen many weaker-than-expected economic data points over the past couple of months, and employment has been the biggest positive outlier. Many are viewing the bad month for employment as the final piece in the puzzle that says the economy is moving back to recession.

I don’t think so. I interpret this as another seasonal adjustment, subject to weather and negative factors outside the U.S. We saw this last year, from a weather standpoint, and it would be surprising if the decline in oil prices and the strong dollar didn’t affect the rest of the economy.

I could be wrong, of course. If we get another couple months of employment growth like we just had, I will be revising my conclusions. At this point, though, the weight of the data suggests this is just a bump in the road—albeit a large one—rather than a car-eating pothole. 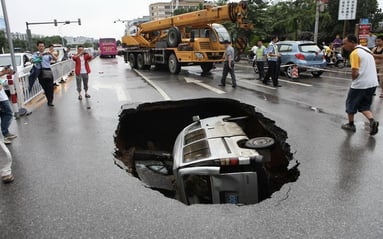 Slow down, drive carefully, and carry on.