When good news turns to bad news in the U.S., it tends to become even worse news for emerging markets. For example, in 2018, emerging markets started from a position of strength—having returned 38 percent in 2017 and riding on the enduring optimism of global synchronized growth. As economic data showed continuing strength in the U.S., however, investors got worried about the prospect of the Fed hiking rates more aggressively. This alarmed equity investors globally, particularly in emerging markets.

The flight to safety

An outcome of the flight to safety that we witnessed in the last two weeks was that the S&P 500 declined 7.24 percent in the first nine days of February, while the MSCI EM Index declined 7.75 percent.

As much as we would not like them to, equity flows tend to follow performance. This trend is even more pronounced in emerging markets. Investors pulled assets out of emerging market equities in 2014 and 2015 as performance for the asset class suffered. In 2016, the asset class broke even in terms of flows, and 2017 concluded with large inflows of approximately $80.5 billion. This year was off to a good start as well, with $25 billion in net new money flowing into emerging market equities in January alone. 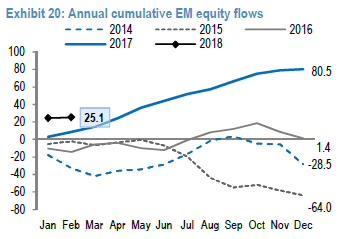 ETF money generally tends to be less sticky, and this became quite evident last week: flows in emerging market equities slowed sharply to +$572 million from +$6.4 billion in the week prior. ETFs saw investor outflows of –$316 million, while actively managed funds received +$887 million of inflows. This was a clear indication that hot money headed for the exits at the first sign of trouble. 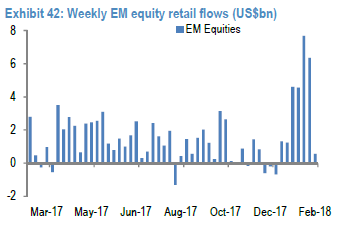 From a long-term investor’s perspective, however, the fundamental reasons for owning emerging markets at this point in the cycle remain just as strong as they were two weeks ago. Emerging market companies are poised for expansion in earnings, as these countries lead their developed counterparts in GDP growth. Many developing countries have made a lot of economic and political progress in the years following the recession, have cleaned up their balance sheets, and have shored up their balance of payments. Benign inflation in many emerging countries leads to positive real yields on their sovereign and corporate bonds. Thus, they are better prepared to live through a Fed rate hike cycle than many give them credit for.

Further, the U.S. trade deficit is keeping a lid on dollar appreciation despite a steeper rate trajectory, as is the imminent possibility of the European Central Bank applying gradual brakes on its quantitative easing program. Thus, the dollar will not be as much of a headwind on emerging market currencies when rates move higher in the U.S.

Finally, if we look at how emerging market equities have fared in previous cycles, we find that emerging markets have performed quite well in the rate-tightening cycles of the last three decades.

Given all of this, it will likely take more than a 1-percent rate hike in the U.S. in 2018 to derail emerging markets or to necessitate a change in outlook and allocation for this asset class.