The COVID-19 pandemic has exacerbated many issues that have been plaguing the social fiber of our nation for many years, including racial discrimination and economic and gender inequalities. Communities, governing organizations, and companies have responded by enacting regulations, guidelines, and programs that address these issues while also emphasizing the changing preferences of consumers. Below, I’ll unpack the business and investing case for addressing our nation’s evolving demographics. We should do so not because it’s “the right thing to do,” but because understanding this topic is necessary for resonance with consumers and investors now and in the future.

The year 2020 is expected to be a pivotal year for U.S. demographics. According to the U.S. Census Bureau projections, just under one half of children under the age of 18—49.8 percent to be exact—living in the U.S. in 2020 will be determined to be non-Hispanic whites. This number should decline even further over the coming decades. As demonstrated in the following chart, two out of every three children are expected to be a race other than non-Hispanic white by 2060. 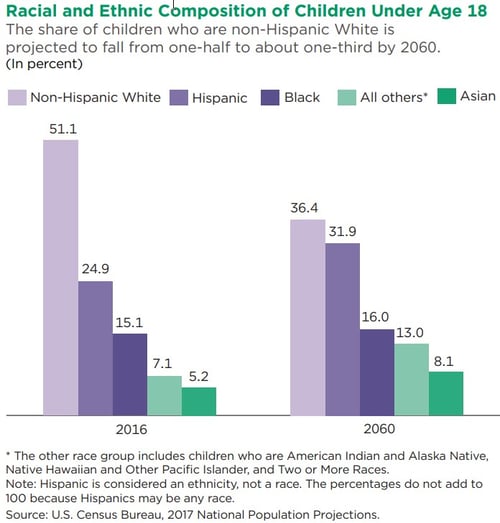 While the aggregate U.S. population still looks like a white majority, whites should become a minority by 2043, dropping below 50 percent of our population. Additionally, working-age Americans (those between the ages of 18 and 64) should become a “majority-minority” by the year 2039. Given the pervasive impact of race on nearly every aspect of American society, these demographic shifts will have major implications for the future of the country. Our policies, economy, businesses, and even our investments will change. With these tectonic demographic shifts on the horizon, it’s unsurprising that social justice issues have dominated news headlines of late. 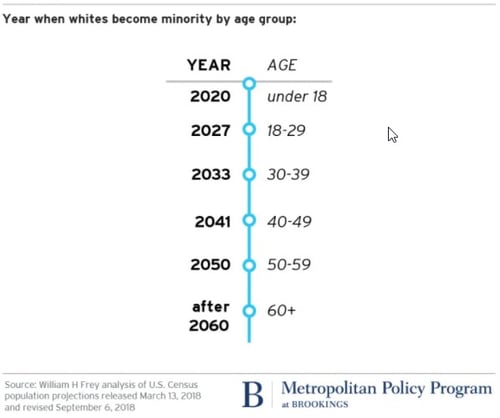 When assessing consumer spending by race, it’s also unsurprising that Americans in different income brackets tend to spend their money differently. Yet the differences in spending habits extend far beyond the dollars earned by families. For example, families who are within the same socioeconomic bracket but who are not the same race tend to spend money differently. The table below illustrates the average annual expenditure of consumers in the U.S. by race. In 2019, Asian Americans, on average, spent the most dollars on housing, transportation, food, personal insurance and pensions, and education. Black Americans spent the most on apparel and services. Whites and all other races spent the most on health and personal care, entertainment, alcohol, and tobacco. The evidence clearly supports the notion that consumer spending habits vary by race—a fundamental element for businesses to consider in positioning their products and services.

Average Consumer Expenditure in the U.S. in 2019, by Race 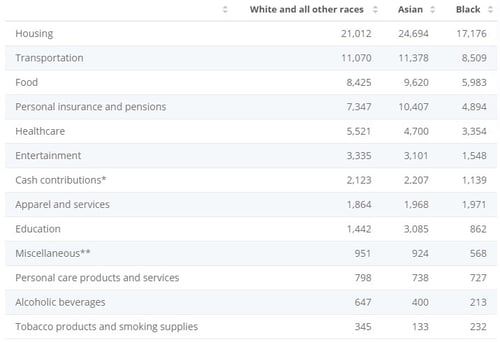 As the second-largest—and second-fastest-growing—demographic in the U.S., Hispanic Americans should account for a third of the American population by 2060 and will likely outspend whites in comparable economic brackets over their lifetimes. Only a few decades ago, Hispanic Americans were an emerging niche, primarily made up of migrant farm and factory workers and lower-income service workers. In 2020, however, according to the latest Hispanic American Market Report by Claritas, Hispanic households spent 17 percent more than other U.S. households on soaps, detergents, and other laundry and cleaning products. Accordingly, consumer-packaged goods companies might consider Hispanic households an attractive target market. In addition, Hispanic Americans tend to embrace the DIY (do-it-yourself) model, particularly when it comes to automobiles. This characteristic should make Hispanic Americans an excellent target group for automotive aftermarket retailers, as well as manufacturers of vehicle parts and fluids.

Nearly 50 million strong, Black Americans are the second-largest minority group in the U.S. after Hispanic Americans. The spending power of Black Americans has been well documented, especially compared with that of other races. Spending more than a trillion dollars a year, Black Americans have a buying power that’s greater than the GDP of many countries. In 2019, Nielsen, a renowned market research company, released a report on trends in Black buying power, highlighting the influence of advertising on Black consumers’ spending habits. Interestingly, the report found that Black Americans are 42 percent more likely than other Americans to respond to mobile ads. They also shell out 19 percent more on beauty and grooming products than any other U.S. demographic. Contrary to the shoppers powering the recent boom in e-commerce, Black Americans prefer in-store shopping experiences, typically at high-end department stores. This demographic also tends to emphasize giving, donating a larger share of their income to charities than any other group in the nation.

Although the smallest demographic cohort in the U.S., the Asian-American population is the fastest growing. When assessing consumer spending and engagement, the most compelling factor to highlight is the sheer buying power of the Asian-American demographic. The current average household income is 36 percent greater than overall household income and 22 percent greater than the average household income for whites. In its latest Asian American Market Report, Claritas found, on average, today’s Asian household members will spend $1.2 million more than members of non-Hispanic white households over the remainder of their lifetimes. Additionally, Asian-American households spend 21 percent more annually on consumer goods and services than the average U.S. household. That means Asian-American households rank first among all cultural groups, including non-Hispanic white households, for total consumer expenditures. It’s also worth noting that Asian Americans access social media on smartphones 23 percent more than other Americans and are twice as likely to use LinkedIn. 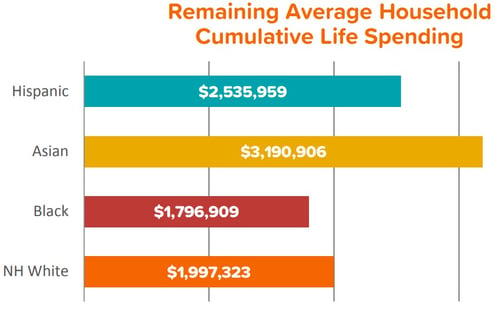 As with other economic trends, demographic trends create both risks and opportunities for businesses, economies, and society as a whole. A demographic turning point such as the one we’re currently experiencing will have a long-term impact on capital markets. For investors, it’s essential to monitor evolving trends, such as consumer spending habits, when identifying investment opportunities and planning strategies to mitigate risks. Furthermore, as the data presented here projects, minorities will soon emerge as the leading component of our nation’s youth and working population—and will also constitute a majority of the voting population. As a consequence, investors should pay attention to and prepare for the disruptive demographic shifts on the horizon. The pace of minority growth in America, coupled with the significant lifetime purchasing power of groups currently in the minority, is worth acknowledging (and embracing!). Therefore, the investment insight we should derive from the coming demographic megatrend is this: Invest in companies with the strategic foresight to pivot their businesses based on the demands of changing demographics.