Election Surprise: For the Economy, Maybe Just Another Bump in the Road 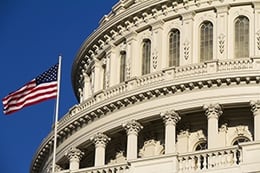 We woke up this morning to a new era.

For the past several years, the United States has had either a Democrat-controlled government or a divided government. As a result of yesterday’s vote, Republicans will soon control the presidency, the Senate, and the House.

Throughout the campaign, much of the media coverage on both sides has verged on the apocalyptic, and, indeed, there may be substantial challenges as a new administration comes into power. But the reality is that the sun will continue to come up each day, and the country will move on.

In the wake of the election, financial markets around the world pulled back significantly. Markets hate surprises, and this is a big one. As we recently saw with the Brexit vote, however, a short-term shock doesn’t necessarily spell longer-term problems. Indeed, after a sharp drop, S&P 500 futures have partially bounced back.

Whether the initial pullback worsens depends on if Donald Trump reaffirms some of his policies that appear more economically risky. How he deals with NAFTA, for example, could either reassure markets or rattle them further. He will face considerable pressure to start putting policy specifics in place very quickly.

The other piece of the puzzle will be how Trump works with the Republican Congress. On the face of it, this should be a good partnership, as all are from the same party. At the same time, Trump’s relationship with the party has been fraught throughout the campaign, and some of his policies are at odds with Republican orthodoxy. Certainly, his victory speech was encouraging in this regard, as he asked for the support of those who did not back him, and everyone involved has substantial incentives to act in unison.

There are real risks here, for the economy and the markets, but they are largely under the president-elect’s control. He has the ability to steer the situation with markets by offering clarity on economic policy and by working closely with the Republican Congress. It’s also important to note that many of Trump’s stated policies, such as those related to tax cuts and infrastructure spending, would actually stimulate the economy and could well lead to faster growth in the short term.

Fundamentals stand to carry us through

With economic growth continuing and companies returning to profit growth, the fundamentals of the economy and the markets are sound. The real question here is whether Trump’s election will disrupt that. Absent policy mistakes, there is no fundamental reason that it should.

Despite the significant political differences between the two candidates and the concerns expressed on both sides, the short-term impact of the election could well be minor from an economic perspective. Although there will inevitably be a period of adjustment and possibly volatility, if Trump works effectively with the Republican Congress to enact economically positive policies, the strong fundamentals should act to support both the economy and the financial markets.

In short, although the coverage of Trump’s victory is every bit as dramatic as the victory itself, the fundamentals remain positive and should stay that way. The U.S. economy has weathered many ups and downs since the financial crisis, and this election could be just one more bump in the road.