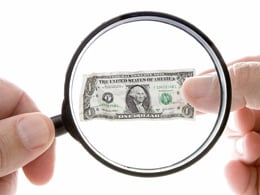 I'll be out of the office for a few days, so I'm revisiting some of my past posts. (Today's originally appeared in September 2013.) Look for a new post tomorrow!

When I last wrote about inflation, in January 2013, it wasn’t a pressing concern. I did note that we’d have to start paying closer attention when three things happened:

We’re seeing all three of these now, so it’s time for another look.

One of the arguments for maintaining the Federal Reserve’s stimulus program (albeit one that hasn’t gotten a lot of play) is that inflation is still well within a reasonable range. With the stimulus set to continue, we can expect inflation to remain at current levels, and quite possibly to increase. This is actually a goal of the Fed’s—and it usually gets what it wants.

The Fed has a dual mandate: to maintain stable prices and foster high levels of employment. Historically, the stable prices component—that is, low inflation—has taken a higher priority. Recently, though, that has changed. Over the past several years, with the onset of the financial crisis, the Fed has sought to generate inflation to combat the threat of generally decreasing prices, or deflation.

Why deflation is bad

Deflation is generally considered bad, since it depresses economic growth, increases the real burden of existing debt, and is very difficult to fix with existing policy tools.

You can see this with some simple thought experiments:

The Fed has been committed to fighting deflation since the crisis, basically saying that an inflation rate of around 2.5 percent would be tolerable. What this means, over time, is that prices will double every 30 years. In the next decade, you would lose about 30 percent of your purchasing power. Needless to say, acceptance of this level of inflation isn’t universal. Whether you approve of the policy or not, though, you will be hit by it and should understand the results.

How do we measure inflation?

Inflation as a concept is simple. Where it gets hard is deciding how to measure it.

“Laws are like sausages,” Otto von Bismarck said. “It is better not to see them being made.” The same might be said of economic statistics, but I disagree. The bedrock of most economic analysis is good data.

I’ll also refer to what you might call an antigovernment website, www.shadowstats.com, which is run by an economist who has made a career of attacking the methods and results of the federal agencies. Shadowstats is the best known of these sites, but hardly the only one; their essential thesis is that the government statistics are systematically manipulated—for example, had certain methodological changes not been made to the CPI, social security payments would be twice what they now are.

Why focus on the CPI?

Price inflation, as expressed by the CPI, is important for several reasons:

Finally, I’m writing about this because my father, who has little knowledge or interest in economics, has asked me how inflation can be down when the prices of everything are up. If my dad is asking the question, then many readers probably are as well.

See the next installments in this series for a closer look at the issue: