Looking ahead into 2017, one big theme that will carry over from last year is the positive change in confidence. Consumer confidence has increased dramatically, especially since the election, and just spiked to a point last seen in 2001. Business confidence continues to rise and is now at a level not seen since 2007.

Clearly, if confidence is any indication, we are in a boom time, and 2017 should be a good year. But is confidence a reliable guide to the future? 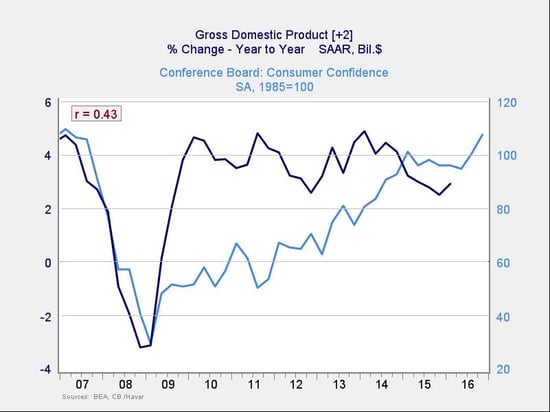 This makes sense, given that consumer spending represents more than two-thirds of the economy. If people feel good, they will spend more, and the economy will grow faster. But there’s a real difference between being willing to spend and actually spending, and this difference has shown up in the past month, with spending below expectations even as confidence rose. So, before we get too excited about the rise in confidence, we need to examine whether consumers are likely to actually spend.

As you can see below, higher confidence does seem to lead to lower savings—and thus higher spending—over a period of about six months (the lag shown in the chart). 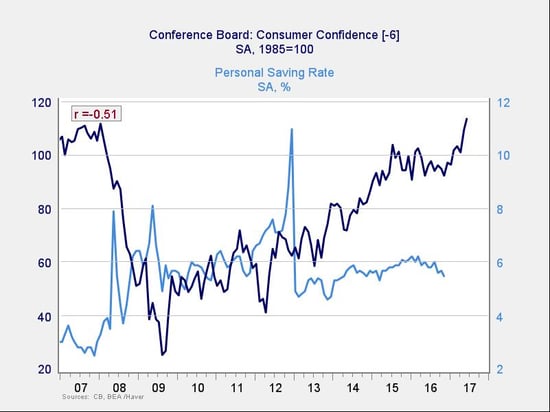 This is consistent with the time frame in the economic growth chart, suggesting that the causal link is real. With the recent spike in confidence, we can reasonably expect savings rates to drop and spending to go up during that time frame, which would be positive for growth.

Business confidence. Consumers don’t drive all of the economy, though. We also need to consider business, particularly capital investment, one of the weakest areas of the current recovery. In this case, we’ll use the ISM Manufacturing Index as the confidence index and compare it with total private business investment, as shown in the following chart. 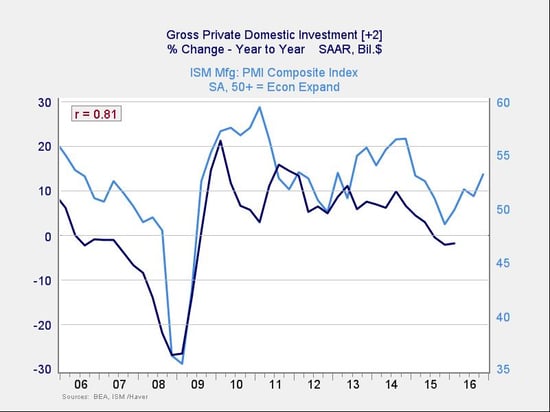 Here, again, you can see both the two-quarter lag and a recent improvement in confidence that should produce higher business investment. This would be a significant boost to growth, as well as a potential start of the kind of virtuous economic circle the U.S. hasn’t seen for more than a decade.

Where's all the positive sentiment coming from?

The sea change in confidence happened right after the election, so the reason, for better or worse, appears to be largely political. And if the new administration and Congress make real progress in delivering on their pledges, that confidence could grow even further. On the other hand, if they don’t follow through, most of the recent gains could disappear as quickly as they came.

In many ways, the story of 2017 is shaping up to be all about politics. The difference this time is that we have much more solid fundamentals, giving politics the chance to accelerate growth rather than simply slow its decline.