Chinese Tech Stocks: What Does the Future Hold for U.S.-Based Investors?

China’s push for what is known as “common prosperity” has led to more of a crackdown on companies that don’t fit in with its longer-term goals. Harsh Chinese regulatory oversight is not new, yet recent changes in the country’s philosophy have led to more concerns about the future ramifications for Chinese companies listed on U.S. exchanges. Below, I’ll dive into the regulatory concerns and how they might affect any U.S.-based holders of U.S.-listed Chinese securities.

For the past two decades, China’s success has helped propel the world’s economy and tilted the global power balance in China’s direction. The chart below, cited in the blog of Professor Aswath Damodaran of NYU Stern, is quite telling. Despite a slowdown in growth coming out of the financial crisis of 2008–2009, China has accounted for nearly two-thirds of global GDP over the past decade.

Similar to the shift to technology in the U.S., the balance of power in China has shifted from financial and industrial-based companies to technology giants such as Alibaba, Tencent, and Baidu. According to the data presented by Damodaran, by the end of 2020, six of the top fifteen companies in China were in the tech sector, with Tencent and Alibaba topping the rankings.

Yet, despite above-average growth fueled by continued advancement in the tech sector, China has faced increasing income inequality. In fact, as shown in the chart below, China has experienced the worst levels of income inequality among all emerging markets countries. 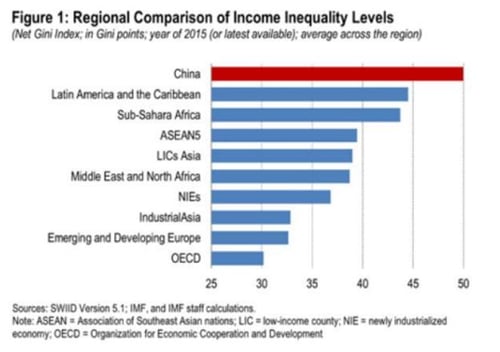 This environment has led to an increased focus on regulation in China. The nation’s goal is known as “common prosperity,” a concept that aims at “pulling millions of people out of poverty” through sustainable, balanced growth, as noted in a post by my colleague Anu Gaggar.

We’ve seen China react quickly to anything that doesn’t help meet this objective. In October 2020, China outlined a new five-year plan that called for a focus on domestic consumption while reducing disparities between urban and rural living standards. The plan focused on hard sciences such as biotech, semiconductor technology, quantum computing, space exploration, and climate technology, among others.

In August 2021, China threw the gauntlet down on the for-profit education space, effectively curbing online and private tutoring. The reason? In China, parents spend thousands more on educational expenses than they can afford. This practice lines the pockets of education companies, benefitting the shareholders but not the families themselves. The high education costs have led to a reduction in the birth rate in China, a trend that is notably against China’s long-term goal of increasing its overall population.

According to Hayden Capital, “On average, Chinese parents spend ~$18,000 USD per year on after-school tutoring. Considering China’s average GDP per capita is only ~$10,000 USD, it is obvious that the bulk of a family’s resources are going towards their kids’ education, with additional support from the extended family and savings.”

And then there’s DiDi Global, China’s largest ridesharing company. It was forced to delist from the U.S. exchanges only a few months following its IPO listing on the NYSE. The DiDi situation was a bit of an isolated event, driven by China’s more recent focus on data protection, but it added some fuel to the regulatory fire.

The Risks of VIEs

Complicating matters further are the issues of variable interest entities (VIEs). In simple terms, a VIE is a legal business structure that allows U.S.-based investors to invest in Chinese stocks traditionally restricted from foreign investors. A VIE starts with a shell corporation established outside of the home province—often in the Cayman Islands for beneficial tax treatment. The shell corporation has some rights to the economic interests of the business in China. These rights are formed via various contracts, but the VIE does not have actual ownership in shares of the company itself. This is an important distinction.

The chart below shows the corporate structure for Alibaba. If you look at the arrows closely enough, you can see that the VIE (in this case, Alibaba Group Holding Limited of the Cayman Islands) is arranged through a series of contractual arrangements with Chinese companies onshore in China. 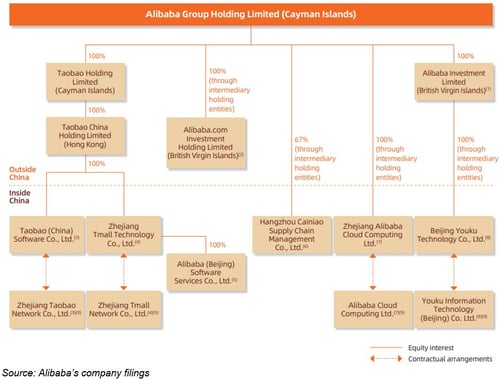 Fraud allegations. When I started studying VIEs more than 10 years ago, I was initially quite wary that U.S.-based shares of a Chinese company might not provide an investor with any actual business ownership. At that time, VIEs were in the limelight, due to numerous instances of fraud accusations leveled at Chinese-based VIEs. In one notable case, involving Yahoo and Alibaba, Jack Ma, the founder of Alibaba, tried to walk away from the company with a valuable payments subsidiary—Alipay.

In 2011, according to GCI Investors, “. . .Alipay was stolen from the US and European investors in Alibaba’s VIE structure when the founder and CEO Jack Ma unilaterally transferred 100% ownership of Alipay into a different company controlled solely by himself. One of the shareholders hurt was Yahoo who were a big early investor in the Alibaba VIE, amassing a 43% stake. . . .However due to the VIE structure, Yahoo (and other shareholders alongside them) were powerless to do anything. They had no legal recourse.”

China’s blind eye. Since the first VIE launched more than twenty years ago, China has effectively turned a blind eye to the VIE structure. Why? Well, VIEs have been good for Chinese companies, allowing businesses to raise external capital and contribute to China’s massive growth engine.

Still, it seems that investors dwell on the VIE structure every couple of years, due to the risks faced if a VIE were declared illegal by the Chinese government. Following all of the regulatory crackdowns made by China, the risks have started to percolate again.

Potential banishment. Rumors were swirling recently on the potential Chinese banishment of VIEs. But, according to the South China Morning Post, the China Securities Regulation Commission denied this report. Would an outright ban on VIEs be good for shareholders? Probably not. But I think it unlikely that China wants to completely cut off Western-based investors, severely restricting external capital-raising potential. The key is that if a company remains traded on a U.S.-based exchange, it should be fulfilling some objective that fits in with China’s goal for common prosperity.

From what I’ve read, it does not appear that China will ban VIEs, but more regulations may be on the way. Still, I believe the risk of the banishment of VIEs is not a zero probability event and that investors should account for this possible danger. The potential banishment of VIEs will likely remain an overhang on Chinese stocks for the foreseeable future.

Risks of China-Based Companies Getting Delisted in U.S.

The SEC recently finalized rules relating to the Holding Foreign Companies Accountable Act, which states that the Commission can delist any company which does not abide by its requests for audits; specifically, if the Public Company Accounting Oversight Board (PCAOB) cannot perform its required audits. Historically, China and Hong Kong have not allowed the PCAOB to review the audits of the respective country’s firms. Based on news reports, however, China now appears to be cooperating. The SEC rules also ensure that companies formed as a VIE provide enhanced disclosures.

Still, there are certainly risks of a forced delisting in the U.S. for any China-based company, based on noncompliance with the PCOAB. Some analysts believe that China will never come to an agreement with the U.S. regarding audits and that all Chinese companies will eventually delist from the U.S. exchanges.

A few issues are at play here. First, there are certainly risks from a regulatory perspective for any Chinese company. If a business is at odds with any of China’s long-term objectives, there is even more risk. For example, New Oriental Education & Technology, a for-profit Chinese education company, saw its stock price wiped out overnight following China’s implementation of regulatory restrictions.

Investors should also be aware of China’s clampdown on technology companies. The cancellation of the Ant Financial IPO is one example. Other examples are the continued pressure on gaming companies such as Tencent and the recent regulatory actions against Alibaba and Tencent.

The simple explanation, as I see it, is that if China doesn't believe a company is benefitting the greater good of its society, it will not let that business thrive. China has prioritized certain areas of technology as outlined in its five-year plan. These areas are in markets such as semiconductors or biotechnology, which benefit the growth of China’s society. But China eschews technology sectors such as social media, e-commerce, and gaming, believing they do little to advance society.

Thus, an investment in China, especially in the China-based tech companies that trade on U.S. exchanges, is a bet on the future regulatory regime and its impact on these companies. Companies such as Alibaba and Tencent could continue to remain under massive regulatory pressure as China starts to play catchup with the rest of the world in terms of technology oversight. The past year of antitrust actions, as evidenced by the chart below, has shown that China is serious about taking action against monopolistic practices.