Banks Back on the Road to Recovery 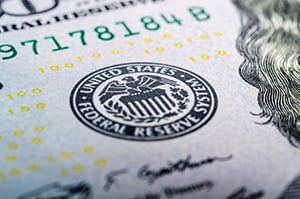 Banks have been deeply out of favor for a long time. In fact, you can see in the chart below just how poorly the S&P 500 Financials Index has performed compared with the rest of the index in this century. Bank stocks had barely started showing signs of life after a lost decade since the great financial crisis when the COVID-19 pandemic hit. The Fed quickly sprang into action and brought the federal funds rate back to the floor after barely taking it halfway up to the pre-2008 level. Economic activity shut down and millions lost their jobs. Banks paid a price yet again, as their stocks were one of the worst hit when the pandemic brought the world to a grinding halt in 2020. 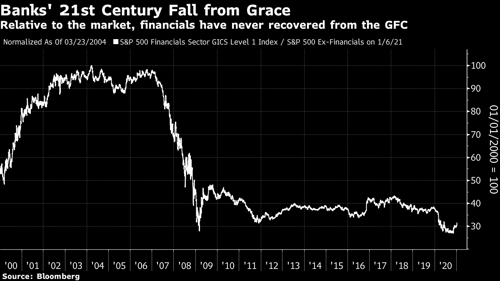 Recently, however, banks have seen a massive recovery. Since the trough of March 23, 2020, they have outperformed the S&P 500 by nearly 27 percent. Vaccine announcements; U.S. election results, along with subsequent hopes of massive fiscal spending; and expectations of rate normalization and reflation have acted as catalysts. But over a longer horizon, they still have a lot of catching up to do. As we begin to put the COVID crisis in the rearview mirror, could this be a new dawn for the banks?

One immediate lesson from the pandemic is that the risk controls put in place after the great financial crisis served their purpose. Bank regulation became quite stringent after the crisis, and banks were required to shore up their balance sheets and strengthen their capital ratios. The quality of their loan books improved as credit underwriting remained conservative after the crisis. As a result, banks were in a much stronger position going into the pandemic. Their businesses were undoubtedly affected; however, it was nowhere close to the mayhem of 2008.

Loan Losses Not So Bad

Banks were required to set aside generous reserves in anticipation of loan losses due to dwindling economic activity in 2020. This was money that they could not lend and earn revenues on. But with the Fed and the government providing all the support needed to keep households and businesses afloat, massive bankruptcies and loan losses did not materialize. That said, it is likely that the credit cycle may take a turn for the worse when all the fiscal and monetary support is phased out. Nevertheless, banks have proven that they have plenty of cushion to withstand material deterioration and can bolster earnings if they continue to unwind the huge COVID provisions.

Economic activity was hit hard last year as the world dealt with this unprecedented health crisis. Thanks to advancements in medical science, vaccines were developed in record time, and nearly half of the U.S. population has already received at least one vaccine dose. With the aid of the Fed and multiple COVID relief bills passed by Congress, economic activity has had a strong recovery.

Banks are in a very cyclical business. There are many variables that determine their revenue and earnings trajectory, but the economic cycle is the most important. Banks require individuals and businesses to earn, spend, deposit, and borrow. With all these economic activities rebounding strongly from the pits of 2020, the outlook for bank earnings is quite strong.

Low Rates No Problem for Banks

It is often argued that banks cannot be profitable when rates are so low. There is some merit to this argument, but it is really the net interest margin that is more important to them. Simply stated, net interest is the interest earned net of the interest paid. Banks take in mostly short-term deposits and lend them forward for longer durations. They make money from the gap in interest rates at which they borrow and lend. With the Fed anchoring short-term rates to nearly zero, banks can borrow at very low rates. At the longer end, the bond market is already responding to better economic data. The U.S. 10-year Treasury yield, for instance, has risen from a 2020 low of 0.50 percent to nearly 1.65 percent. Thus, even at such low rates, banks can make money as the longer-term rates rise while short-term rates remain low.

In fact, major U.S. banks had a banner year for trading revenue in 2020 as the pandemic roiled the markets. Looking ahead, as the economic recovery continues, the baton will be passed from trading to other investment banking activities and will keep the banking machine roaring.

Dividends and Buybacks Are (Almost) Back

The Fed had put restrictions on banks from rewarding shareholders with dividends and buybacks in 2020. This was done as a precautionary measure to force banks to stockpile capital, maintain lending firepower during the pandemic, and prevent a repeat of 2008’s taxpayer-funded bank bailouts if massive losses were to occur. As we come to an end of the pandemic-era restrictions, large U.S. banks that clear the next round of Fed’s stress tests in June will be allowed to resume dividends and buybacks this summer. This will be another shot in the arm for bank investors.

Banks have cleaned up their books since the great financial crisis and have proven their business strength in the pandemic crisis. Even at low absolute interest rates, they can make money. Strong economic and capital market activity is very pro-financial stocks. Financial strength gives them the flexibility to reward investors through dividends and share buybacks. Financial stocks have seen a strong recovery recently and, hence, are no longer categorically cheap based on their recent history.

Still, the recent run was from very low starting points, and banks still have a lot of catching up to do. But from a fundamental standpoint, the sector remains attractively positioned with a robust runway ahead.