Eagerly anticipated by all, it’s time once again to award the Bubble of the Year statuette, affectionately known as “the Bubby.” The award is a long-standing tradition, dating from yesterday afternoon, when I spent some time contemplating the day’s bitcoin pricing. With bitcoin up roughly 50 percent so far this month—and increasing significantly during this past year—we must ask, “Is this a bubble?” And if so, “What exactly is a bubble?”

The characteristics of a bubble

I agree with everything in that definition, and I especially like the source. (After all, they would know!) So, let’s use it.

One of the characteristics of a bubble is that it seems to make sense at the time. Investors may look at it and think it odd, but in the moment, people mostly just go with it—for example, housing in 2005, or Internet stocks in 1998. In both instances, people probably noticed things were pricey, but since the trend was solidly up, perhaps they thought, “Things really might be different this time.”

You can keep pushing up prices for quite a while using that thought process.

About a year ago, I wrote about interest rates being in a bubble. Now, there are other examples, but bitcoin is the best one, as it has taken the world’s imagination by storm. What’s more, I’ve been fielding questions from clients about how to invest in it—it’s that hot.

So, is bitcoin in a bubble?

It certainly appears to be. Let’s go to the chart. 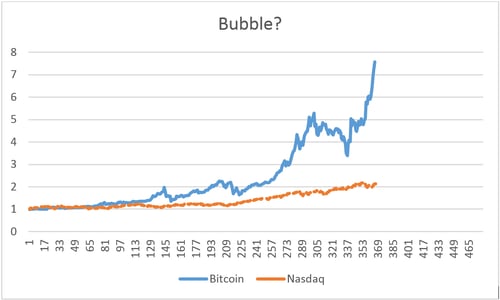 This is something I cobbled together with data from coindesk.com and Yahoo! Finance. I took price data from the year leading up to the market peak for the Nasdaq—March 1999 through March 2000—and then took the most recent year of closing data for bitcoin. I adjusted each to a starting value of 1 to make the comparison easy. Just for the record, this is a quick-and-dirty chart that needs more work, but it does provide a back-of-the-napkin look at how bitcoin is acting compared with tech stocks in general during the dot-com bubble.

Bubbles are difficult to define and subject to argument—particularly from true believers. To avoid that, let’s use the orange Nasdaq line in the chart above as the base pattern of an acknowledged bubble. You can see that, over the year in the chart, the Nasdaq rose from the initial value of 1 to somewhere over 2—a double. Pretty nice gain over a year, right? Unfortunately, the gains were not sustainable; after collapsing, it took 15 years to recover back to the highs. The behavior of the Nasdaq bubble—one of the major ones of all time—gives us a reasonable benchmark against which we can judge other assets.

Which brings us back to bitcoin. I wrote about bitcoin in May after it had just risen above $2,000. Since then (of course), it has doubled again. While there is clearly no reason it can’t keep rising, it is now approaching an eight-times return in a year—compared with the two-times return for the Nasdaq in the dot-com boom. Here, again, we can’t define the fundamental value, because it has no fundamental value! In this, bitcoin is a great fit for the bubble definition. Prices are determined exclusively by supply and demand, and there is no ceiling.

Beyond the definition above, my personal definition of a bubble includes prices going up because of non-fundamental reasons, which again fits very well with bitcoin. With prices rising, investors are ignoring these risks, and I suspect they are buying because of positive returns—not fundamentals. In other words, this is like the Nasdaq in 1999; it’s a momentum market that could change quite quickly—just like a bubble.

For bitcoin, demand seems to be driven by another factor, which is the desire to move capital in a secure and anonymous way. The Chinese, in particular, may be buying bitcoin in order to move capital out of the country. These buyers are not motivated by economics; they want to circumvent Chinese government policies that restrict capital outflows. The need to bypass capital controls is a great precondition for a surging bitcoin—and bubble pricing.

Bitcoin is a not just a momentum story; like housing in 2005, it is also a policy story, driven by regulatory changes and market competition. With housing, things worked until the market got overloaded and lenders and buyers simply could not justify the prices. The same thing happened with gold, although over a longer period. Gold prices went up, unrestrained by economics, until buyers finally said no. This could happen with bitcoin as well.

If bitcoin is a bubble, it therefore resembles both the 1999 Nasdaq and 2005 housing bubbles in different ways; therefore, it has different forces driving higher prices—and different sets of risks. The problem with bubbles of any sort is that they are unpredictable: They go up; they go down; and they last—until they burst. Bitcoin will probably keep going up as long as investors keep buoying it, and as long as there is real demand from buyers who need its anonymity and transferability.

These conditions, however, have fairly obvious risks that would reduce bitcoin demand. Investors are fickle and change their minds all the time. In addition, there are more than 700 cryptocurrencies; one of them could substitute as a meaningful—or better—alternative to bitcoin. Finally, governments could decide to outlaw bitcoin. The bubble’s price is based on perfection. The real world? It’s less perfect.

With prices up almost eight times in the past year, the Bubble of the Year award—the Bubby—therefore goes to bitcoin. While it certainly can keep rising, perhaps it’s time for us to evaluate the risks more than the opportunities. For now, bitcoin is a very worthy recipient and one, no doubt, that will keep the statuette in a place of honor.