A Closer Look at the Conference Board Leading Economic Index

Today’s post is from Andrew Kitchings, a portfolio manager on Commonwealth’s Investment Management and Research team.

When trying to determine the direction of the economy and the market, many turn to the Conference Board Leading Economic Index® (LEI) because it is a composite of multiple indicators covering a broad spectrum of the economy. But the LEI is not overly useful in terms of forecasting future moves in the market. Instead, it can help concisely explain factors that the market is already analyzing and anticipating within the broader economy. Let’s take a closer look.

The LEI can be broken down into 10 indicators that can be used to answer the following questions.

Are people needed to build things? This indicator includes:

How much is being produced for consumers and businesses? This indicator encompasses four components:

How are markets and people seeing the world? Here, the components include:

As I mentioned earlier, the LEI does a good job of describing future trends in the economy but is not a good indicator for revealing the future direction of the market. Thus, when trying to forecast the market, these indicators can be put into three new groups.

Lagging. When using a group of factors, some give slow-moving information, while others can bounce around. Manufacturers’ new orders for nondefense capital goods, excluding aircraft orders, shows just how volatile a single indicator can be. The year-over-year change of this indicator is influenced by U.S. economic factors, changes in currencies, and changes in the prices of commodities. Over time, the U.S. economy has shifted from a manufacturing-oriented economy to one that is more service oriented. Thus, the forecasting ability of this indicator may not be useful in predicting the future patterns of the market and, in fact, is more of a lagging indicator. 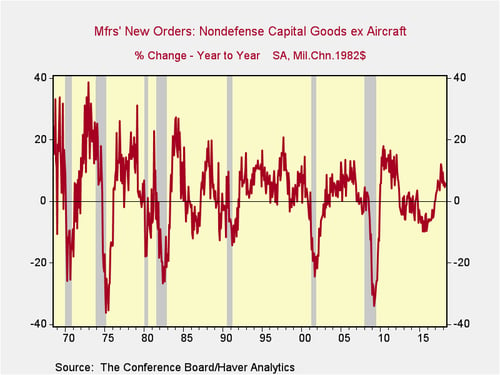 Explanatory. When trying to predict future market movements, one would typically look for a variety of data sources indirectly related to the market. But the LEI directly uses the S&P 500 and consumer business expectations as 2 of the 10 underlying components. Thus, the LEI is overly influenced by the current sentiment and market environment versus being predictive of future seasonal changes in the market. 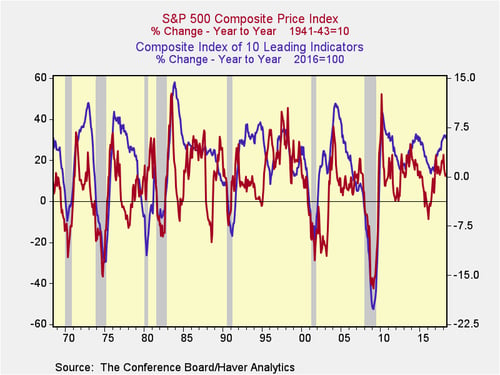 Leading. When looking at a history of the market, changes in manufacturers’ consumer new orders do not predict every change. But this indicator has shown a consistent ability to forecast that the market environment could change. This indicator is important because the consumer is approximately 70 percent of the U.S. economy. As such, a decline here could forecast unsettled conditions for the market and the economy going forward. 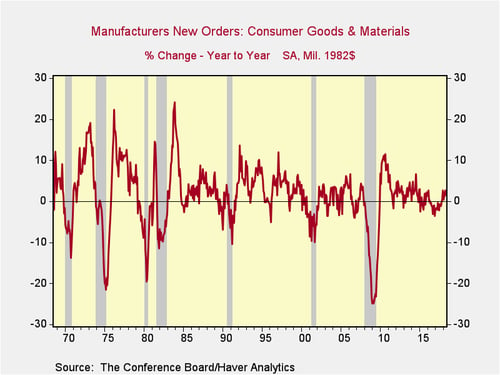 The LEI is often perceived as having the ability to explain the future direction of the markets and the economy. In fact, the LEI tracks the current market rather than indicating future market movements. Nonetheless, the LEI should be part of your toolkit to explain what factors the market is anticipating regarding the future trends within the broader U.S. economy.