A Closer Look at the Chinese Stock Market

For all the media coverage of China lately, Western knowledge of these markets—and the ability of U.S. citizens to invest in them—is actually quite limited. As the recent crash has shown, we need to learn more about the Chinese stock market, particularly given that Western firms are increasingly looking to include Chinese companies in their indices.

As Brad has pointed out during the past few weeks, the situation in Greece is worrisome, but China—the second largest economy in the world—potentially poses a much bigger problem.

Although the sky seemed to be the limit not so long ago, the Chinese stock market went into a free fall last week. The market has since rebounded, but it’s yet to be seen if the recovery can be sustained. Since its peak on June 12 this year, the Shanghai Composite Index has lost more than 25 percent.

The earlier rally in the Chinese market was driven primarily by retail investors, who flocked to the stock markets both as an alternative to real estate, which had lost its charm, and as an easy way to make a quick buck. This is a classic case of behavioral finance at work, with the markets driven by overpowering sentiments of greed, fear, and, ultimately, panic.

The Chinese authorities have been quick to take steps to calm the market. Among other measures, the People’s Bank of China will provide liquidity to state-owned China Securities Finance Corp to finance margin trading, along with purchasing blue-chip and small-cap stocks. IPO issuance has been put on standby. A unit of China’s sovereign wealth fund is buying ETFs. State-owned enterprises will not sell shares of their publicly listed arms.

Although these steps may be reassuring, they also call into question the merit of the financial liberalization and reform measures that China is undertaking. If Chinese authorities have the ability to “stabilize” or “manipulate” the markets, is this really a free market driven by fundamental, technical, and behavioral factors?

Disconnect between the market and underlying economics

The financial press is now focusing on whether the sell-off will spill over to the real economy and to global markets. China is a big consumer of oil and commodities, and a slowdown in the Chinese economy would impact multinationals, which derive a huge component of their revenue from Chinese sales. Not surprisingly, stock indices elsewhere are taking directional cues from the Chinese indices.

It’s not news that the dragon economy is slowing, but the stock market seems to be somewhat disconnected from the real economy. In the last year, even while a slowdown in the Chinese economy was being widely discussed, the stock market was ablaze. The Shanghai Composite rose more than 150 percent before the current rout began.

So who was really buying? Relatively inexperienced retail investors, who not only put up their hard-earned savings but also borrowed to invest in shares of highly speculative small- and midcap companies. Foreign and domestic institutions generally bought shares of larger-cap, well-established businesses and have managed to stay insulated, or even cash in on the gains before the tides reversed.

Because China only recently began opening up its capital markets, foreign investors currently have a very limited stake of about 4 percent in mainland securities and have not been impacted significantly by the sell-off. But foreign investors' exposure to Chinese securities may soon increase.

In the past, there were very limited quotas for foreign investment in mainland securities, but Chinese authorities are now opening the doors for more foreign money through initiatives like the Stock Connect program. Launched in November of last year, it allows global investors to trade Shanghai-listed A shares via the Hong Kong Stock Exchange and mainland investors to trade Hang Seng-listed H shares via the Shanghai Stock Exchange. A similar scheme connecting Hong Kong and the smaller Shenzhen Stock Exchange is expected to roll out later this year.

Meanwhile, FTSE recently announced its decision to include Chinese A shares in two new transitional emerging markets indices. The larger MSCI Emerging Markets Index has deferred this decision until a few wrinkles related to available quotas, ownership, and limitations on repatriation of funds are ironed out. Nonetheless, it’s not a question of if but when MSCI will take the leap.

Even without the A shares, Chinese stocks (mainly H shares listed in Hong Kong) comprise nearly a quarter of the leading emerging market indices, as you can see in the charts below. With the inclusion of A shares, China could eventually make up nearly half of these indices. 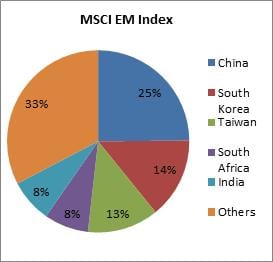 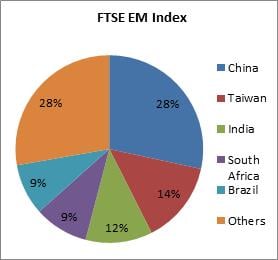 What does this mean for foreign investors?

As the composition of the benchmark indices shifts, foreign investors may see an increasing percentage of their holdings comprised of Chinese securities. Among other considerations for investors:

The recent sell-off in China may not affect foreign investors much in the short term due to their minimal exposure to mainland securities, but it raises concerns about the wider impact if more foreign money were at stake. Flight of capital may be tough for the Chinese authorities to control should a situation like the one we just saw occur again in the future.

Investors should be paying attention to the way China's stock market bubble was created, sustained, and popped, and is now being recreated by the Chinese government, especially given that Chinese A shares will soon find their way into emerging market portfolios.

Diversification does not assure a profit or protect against loss in declining markets, and diversification cannot guarantee that any objective or goal will be achieved.

All indices are unmanaged, and investors cannot invest directly in an index. Unlike investments, indices do not incur management fees, charges, or expenses. Past performance does not guarantee future results.