As I noted a couple of days ago, if you look at average future stock returns from our current valuation level of 26.3 on a Shiller P/E basis, they don’t seem all that bad. Historically, 10-year returns should be in the range of 7.5 percent and 5-year returns around 5 percent, on average. Not too shabby.

Averages conceal a multitude of sins, though, so let’s look a little closer. One question I have is whether the return spreads are consistent over time. If not, we have to ask whether the overall results are applicable to today.

The chart below is from a paper I wrote a couple of years ago on metatactical portfolio management, covering a 40-year period from 1969 through 2009. 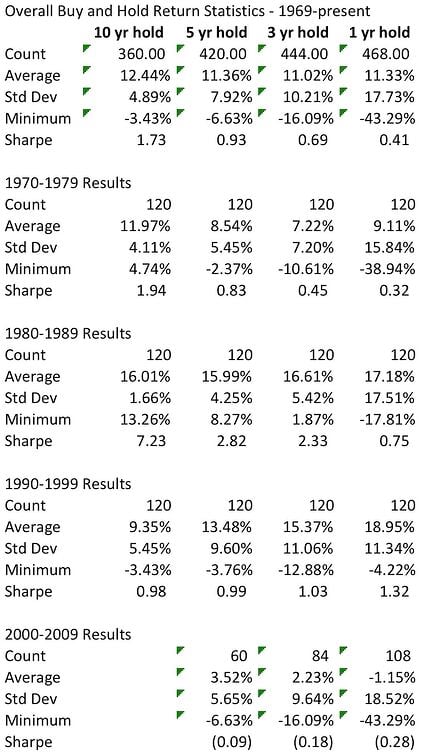 Comparing where we are today with those decades, the market is well above the valuation levels of the 1980s—and quite close to those of the 2000s. Valuation levels were rising in the 1980s, which drove exceptional returns. Although valuations have risen over the past five years, propelling the exceptional returns during those periods, they don’t have much more room to climb. The 1929 level was 31.5 and the 2000 level was about 44, as you can see in this chart from Robert Shiller. 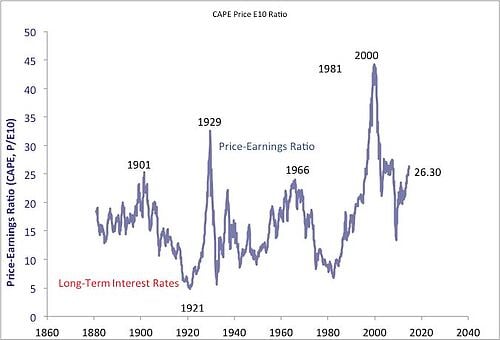 Just looking at the data, in order to get returns like those of the 1980s, we would have to see valuation increases like we did then, which seems unlikely. In fact, given current valuation levels, it seems more probable that valuations might drop, leading to returns more like those of the 2000s.

Comparing current valuations to history, we’re above all points except 1929, 2000, and the mid-2000s. From that perspective, some kind of a drop doesn’t seem that unlikely.

Another issue is that current profit margins are well above levels that have been considered normal over the past couple of decades. If you adjust the Shiller P/Es to normal profit margins, they rise substantially, bringing current valuations closer to or above those of the mid-2000s and of 1929—and making the 2000s return sets even more applicable as an indicator of future returns.

By accepting the Shiller P/E ratios, or any such ratios, as normal, you’re implicitly assuming that current record profit margins will continue for the foreseeable future.

Other assumptions baked into a “normal” analysis include:

If you assume the current P/E ratios are normal, you're basically buying into the idea that these trends will continue.

For all of these reasons, I suspect the average returns we discussed the other day may be optimistic. We’ll talk some more next week about what that might mean.