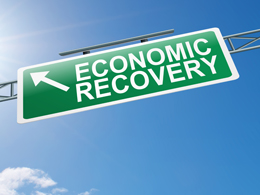 My initial outlook for 2014 was based on an improving economy across the board. As we approach the middle of the year, that forecast is playing out.

Here’s how I see the rest of the year unfolding:

We started 2014 in a much better place than we did 2013. Employment, both current and trend, was up. The housing market was much improved. The consumer was much stronger. The government was more stable—and in a much better fiscal position. The stock market responded to this ongoing improvement by posting its best year since 1997.

Although the first quarter was snowed out, the second quarter looks to fare much better, with the prospect of economic warming kicking in at the global level for the rest of the year. First-quarter economic growth of 0.1 percent—which was recently revised to a loss—was driven by record-setting snowstorms, leaving hundreds of thousands more workers than usual stuck at home in January and February. Improving weather in March and April sent those workers back in, along with many others, leading job figures to increase at their highest level in years and driving private employment to an all-time high.

What will the rest of the year bring?

Looking further into 2014, we can expect the underlying economic trends to continue.

All things considered, I expect to see real economic growth of around 3 percent for the remainder of the year, with the possibility of stronger performance.

With consumer spending growing at around 4 percent on a nominal basis, business investment growing at around 8 percent, and government spending essentially flat, 3 percent appears both reasonable and achievable. Combined with inflation of around 1.5 percent for the year, nominal growth should approach 4.5 percent—better than we’ve seen for some time.

What risks do we face?

The risks here are largely on the upside. If consumer borrowing were to pick up, spending could grow faster than wage growth. Business investment could finally respond to improving demand and rise more than expected. Local and state governments could increase investment and hiring more than expected.

Downside risks are more limited and primarily external, with Europe and China remaining as possible negative actors in the world economy and financial markets. The major domestic downside risk is of slowing employment growth, of which there are few signs. Should employment growth drop, the rest of the economy would also slow. Nonetheless, the most probable case remains continued economic expansion.

Struggles ahead for stocks?

The stock market, on the other hand, will likely face larger challenges this year. I expect the U.S. equity markets to end 2014 at about the same level as they are now—around 1,875 for the S&P 500. Although earnings should continue to grow, they would do so more slowly than expected, and valuations may be adjusted over the year as investors expect lower future growth—and pay less for stocks. Interest rates also will likely rise somewhat over the year, making bonds more attractive as an investment and lowering the present value of the slowly growing earnings stream even more. Lower valuations would offset somewhat higher earnings, leaving the market essentially flat for the year.

As I see it, the risks to the market are mostly on the downside. Valuations remain high—on some metrics, higher than they were in 2007, for example. Profit margins are at historic highs, and the tailwinds that got them there are disappearing. Stock buybacks, which have been responsible for much of the growth in earnings per share, appear to have peaked—and, in any event, have become less effective for every dollar spent as prices increase. And unlike in the real economy, market-related debt has increased back to 2007 levels and above.

That said, it’s possible that retail investors could start to buy in to the market, driving valuations even farther above historic norms and creating a bubble effect. Although this could certainly happen in 2014, it would only set the stage for a more severe adjustment later on.

Despite the weak first quarter, the recovery continues and should strengthen through the remainder of 2014. As the Fed winds down its stimulus, we may see moderate increases in interest rates toward the end of the year. I expect the financial markets, on the other hand, to close 2014 at around the same level they’re at right now—and the potential for a decline at some point during the year is very real.