1/28/14 – Where Are Interest Rates Headed? Let’s Consult the Taylor Rule

There’s been quite a bit of speculation lately regarding the long-term direction of interest rates, particularly around movements on the short end. We’ve heard numerous specialists’ thoughts on the subject, and most believe the Fed won’t hike rates on the short end until late 2015, at the earliest. Although they make for good sound bites on CNBC, there really doesn’t seem to be much basis for many of these prognostications, so we decided to put pen to paper to assess the direction of rates.

The Federal Reserve’s two primary concerns, explicitly mentioned in almost every FOMC minutes release, are core inflation (headline inflation ex-food and energy) and employment. Often referred to as the Fed’s dual mandate, these two items do a fairly good job of dictating the committee’s future policy actions. But how do they affect interest rates?

The American economist John Taylor took up this question in 1993 when he proposed the Taylor rule, a guideline for how central banks should set interest rates. There have been many variations of the rule over the years, but the one that seems most relevant for this analysis equates rates of unemployment, core inflation, and short-term rates to their long-term historical averages. In essence, the rule recommends a relatively high federal funds rate when core inflation is above its target or when employment is above its long-term trend, and a relatively low rate when the opposite occurs.

As the chart below shows, since the beginning of the analysis period in 1995, the Taylor rule estimate has moved, for the most part, in lockstep with the federal funds rate. Although it has been a few basis points off in forecasting the exact rate over the time period, it has done a fairly adequate job of predicting the direction of rate movements. After all, when managing a client portfolio, whether the rate moves to 1.25 percent or 1.5 percent matters less than the direction of the movement itself.

For most of the last five years, the Taylor estimate suggested a fed funds rate below zero. Conventional monetary policy was an ineffective tool with a fed funds rate at 0.25 percent, so various quantitative easing programs were introduced in order to depress rates further. The programs seem to have worked: unemployment has come down significantly, and inflation is on the rise. Even more important, the Taylor rule is suggesting a fed funds rate north of current levels, at around 0.70 percent, bringing us back into “conventional” territory.

As mentioned above, it’s not necessarily the level of rates indicated by the Taylor rule but the movement of the estimate that’s important to watch. For instance, following the recession of the early 2000s, the Taylor estimate increased prior to a hike in the fed funds rate. This makes sense economically. Given that the estimate relies on core inflation and unemployment readings, it will naturally move higher as an economy improves, core inflation increases, employment figures tick up, and the unemployment rate declines. Monetary policymakers, however, are often reluctant to raise the fed funds rate in the early stages of a recovery, as a preemptive move toward monetary tightening can be disastrous.

Therefore, it’s often prudent, and generally taken as a best practice, for a central bank to be slow in raising rates in an improving economy. This most likely explains the scenario we saw about 10 years ago, when the Taylor rule estimate moved higher ahead of the first rate hike in 2004.

We’re going to keep a close eye on this estimate moving forward, as every movement higher increases the likelihood of a rate hike on the short end, which would impact rates along the entire curve. There still seems to be some time before this happens, especially with a dovish Fed, but it’s generally not a good idea to be the last one exiting a party. 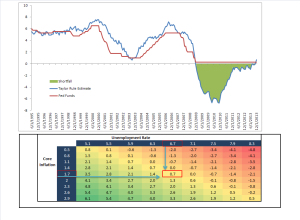