I got some interesting feedback the other day from a Commonwealth advisor who was commenting on a piece I’d written about the economic recovery. His point of view is fairly common and can be summarized as follows: “The fact is that the sheer size of government has doubled over the past 10 years.” He made other points, but they hinged on government growth being out of control. A fair point, if true, but before we get too far into it, I thought it would be useful to see how much government actually has grown. 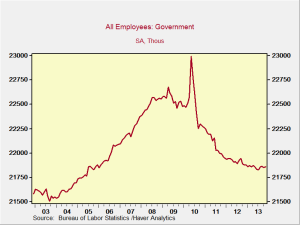 Any way you look at it, though, growth of government employment has either been consistent with, or substantially below, that of the population as a whole.

Another way to gauge the growth of the government is to examine spending. Looking at the following chart, we see that total spending, for all levels of government, has, in fact, increased. Total spending for 2002 to 2012 (since 2013 isn’t yet over) is up around 51 percent on a nominal basis. Adjusted for inflation, spending is up about 9.5 percent in real terms—only slightly above population growth. 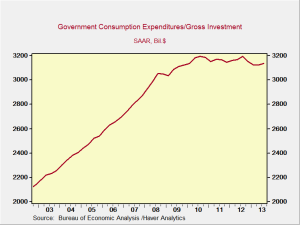 Let’s take a more detailed look at federal spending, since that seems to be the problem, to see if we can find out where the money is being spent.

The data analysis software we use here at Commonwealth, Haver Analytics, breaks federal spending down into two primary components: defense and nondefense. Total spending for both is shown in the chart below, and we can see that both components have grown substantially. 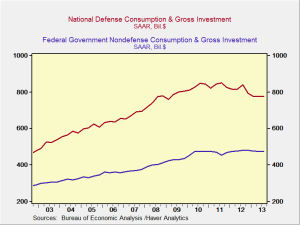 I don’t have the data right now to break down these numbers further, but I do have some questions, primarily about how much of the spending in both components is for nonrecurring items. That is, how much of defense spending was for, say, the war in Afghanistan—which may explain the decline in the past year or so—and how much of nondefense spending was for, for example, long-term unemployment benefits, which will end soon unless extended. It’s entirely possible that much of the increases could roll off over the next couple of years as the economy normalizes and the U.S. military reduces its overseas commitments. This seems quite possible given the real disconnect between spending and employment numbers. The other question is how much of the nondefense spending increase is due to higher benefit payments, which will be a growing problem in the future.

Overall, depending on how you look at it, there is some justification for the argument that government is out of control, at least on the spending front. Examined more carefully, though, the bulk of the increase in government spending comes from defense, which is being wound down.

Further, almost all of the increase in both government employment and spending came through 2008, with leveling or declines since then. While there certainly was a problem with unsustainable growth, it hasn’t continued over the past five years or so.

The argument that the government is out of control has many merits—with regulation and tax levels being the most important, in my opinion—but the share of the government as part of the economy, at least by historical standards, doesn’t seem to be one of them. There is no question we had a growing problem through 2008, but we’ve made substantial progress since then, and it appears poised to continue.