The photo below comes from an old B movie called Independence Day that I’ve always enjoyed. The plot is pretty simple: A race of space aliens shows up in orbit around the Earth and utterly destroys Washington, DC. Later on, though, it turns out the aliens are actually hostile. 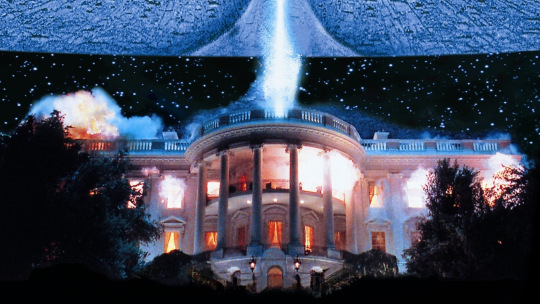 I’ve been using that joke off and on for a couple of years now when I talk about the government, and it always gets a laugh. It’s become clear that, while the Federal Reserve has done yeoman’s work in stabilizing and reviving the economy, the politicians in the White House and the Capitol have consistently failed to meet even minimum standards of effective governance.

I wrote some time ago about Scott Adams’s (of Dilbert fame) advocacy of an Anti-Incumbent Party. Briefly, when things are going badly, it tasks its members with pledging to vote against every single incumbent. I think the idea has a great deal of merit and am happy to mention it again.

Back to economics. The primary conclusion of yesterday’s post was that, because of Amazon’s commanding market position, unless the company repeatedly screws up its customer service over a long period, its primacy is pretty much assured for the indefinite future. With the U.S. in a similarly strong position as the default reserve currency, our management would have to do the same in order to lose that position. The problem is, while I find it almost impossible to imagine Jeff Bezos allowing this to happen, I don’t have to imagine the White House or Congress doing it—I have too many examples close at hand.

Let’s look forward though. What kind of errors would cause countries to abandon the U.S. dollar? The core requirements for reserve currency status, as discussed yesterday, are stability, investability, and portability. If the U.S. government called any of these into question, the threat to our reserve currency status would be immediate. Stability doesn’t seem to be a likely problem in the short term—although, if things get much worse in Washington, that’s an outside possibility. Portability also isn’t really seen as a threat, as capital controls would require much more political support than is available from either party.

That leaves investability, and this is the big one—the mechanism that could translate Washington’s dysfunction into a threat to the dollar.

One of the principal selling points for the dollar is that excess proceeds can be invested risk-free until they are needed. Sure, the returns aren’t great, but Treasury securities are risk-free. You can have trillions in Treasuries, as the Chinese do, and not worry because they are risk-free.

The reason I’ve italicized risk-free, of course, is that’s increasingly not perceived to be the case. When financial analysts build valuation models, they use Treasuries as a risk-free rate. When investors look for a safe investment, they use Treasuries. When foreign businesses hold capital, they are looking to minimize their risk.

The recent series of near defaults on the U.S. debt makes that risk-free status increasingly, well, risky. Prior to a couple of years ago, the notion of a real U.S. default was unimaginable. Now, people like me spend time imagining exactly that. We saw the real effect just recently when short-term interest rates on very short-term Treasuries went up by multiples on the perception that default was quite possible.

The rating agencies have responded by cutting U.S. debt ratings. The government has gone out of its way to intimidate them, however, so the cuts are probably not as much as the rating agencies would have liked. Foreign governments and businesses are also diversifying their holdings away from Treasuries. Remember, there is no economic reason why the U.S. would default, so the risk is exclusively political. Political risk, though, is also what the euro and the yuan face. By putting political risk in play for the dollar, it becomes all the more comparable to the euro and yuan—and makes a shift both easier to justify and more likely.

The tipping point on this will be when the perceived risk from Washington equals or exceeds the risks imposed by other political systems, such as those of the euro, yen, or yuan. When and if we hit that tipping point, there will be no stopping the shift away from the dollar. We have a long way to go until we get there, but we’ve taken the first steps down that road. Hopefully, we’ll step off it again, but that will ultimately be a political decision, not an economic one.