Yesterday, we talked about the two fundamental requirements of money: scarcity and exchangeability. Today, we’ll focus on how those elements work in the current monetary system.

Money today is almost exclusively fiat currency, with no underlying assets behind it. Dollars, euros, pounds, and the yuan/renminbi all have value because their governments say so. “Money” that has no governmental backing, such as gold or bitcoins, is a fringe player right now.

Given the apparent advantages of an asset-backed currency, it’s worth asking why this is the case. After all, the gold standard was, well, the gold standard for decades and centuries. It took the financial burdens of the first World War, which required governments to borrow and spend at previously unprecedented levels, to force countries off the gold standard, so that they could spend more than their gold stocks would allow. This had happened previously in isolated instances—both the Union and the Confederacy issued paper currency for the same reasons in the U.S. Civil War—but WWI was the first time the system had broken down on such a wide scale.

After the war, there was a concerted effort to move economies back to the gold standard, which is covered very well in a book I’ve previously reviewed, but it didn’t work. The system remained broken and proceeded to degrade over time until it finally collapsed in the early 1970s.

The reason the system collapsed was that gold imposed limitations of its own, of too much scarcity. While fiat currency can be expanded, gold can’t. Think of the fiat currencies as elastic-waist pants, which may encourage you to get fat, and the gold standard as tight pants, which may either encourage you to stay thin or split at the most embarrassing time. Governments ultimately opted to take the risk of getting fat over the risk of splitting their pants.

In fact, though, there is nothing implicit in fiat currency that demands stretching. The Greek economy, for example, is based on a fiat currency, the euro. Since the Greek government doesn’t control it, however, and cannot issue new euros, the country is just as constrained by the scarcity of the euro, as mandated by the European Central Bank, as it would have been by a gold standard. The Greek economic collapse is a good example of what might have happened to the entire West had we remained on a gold standard. This is not completely hypothetical, as the situation in Europe post-WWI and the current situations in Greece, Spain, Ireland, and Portugal show. In these cases, the fiat currency system allowed flexibility that a fixed standard wouldn’t have.

Given those limitations, the current fiat monetary system looked preferable to policymakers over the last century, to the point that it’s the only major form of currency available today. Because everyone does it, exchangeability is not an issue. Everyone is willing to exchange; the question is, at what price? Exchangeability then becomes a matter of relative scarcity between currencies. (We’ll discuss this in more detail in a future post on currency collapse.)

I want to focus on the U.S. today, as the dollar is a very good example of how governments are managing currency scarcity—or not. Exchangeability isn’t an issue within a country. As within the U.S., it’s handled in a very simple way: the government says you have to take U.S. currency here. “This note is legal tender for all debts, public and private” means exactly what it says. Therefore, let’s turn our attention to scarcity.

Most of the headlines talk about how the Federal Reserve has expanded its reserves, and how the Fed is forcing money into the economy. The obvious conclusion would be that inflation is coming, in a big way, as all of that new currency will be chasing roughly the same amount of goods. And yet, as we have seen, while inflation has continued, it has remained at low levels. What is going on?

If we look at the change in the money supply, we find it has been growing at levels that are quite consistent with historical rates—particularly when compared to the growth of the economy as a whole, as shown in the following chart. 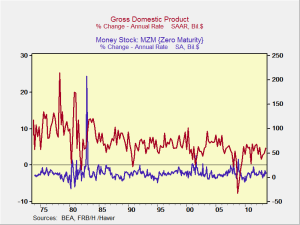 Economic growth has been somewhat slower recently, but the numbers show no sign of an unusual expansion in the money supply, at least by the standards of the last 40 years.

If the expansion isn’t registering in the money supply, what about credit? Perhaps it’s showing up in credit expansion? Again, though, the answer is no. In fact, domestic debt is shrinking, per the following chart. Note that, although we can see debt expansions in the late 1990s and mid-2000s, and this is a valid indicator of future problems, we don’t have that problem right now. 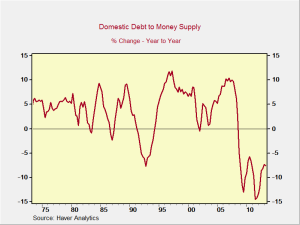 Another way to look at credit as a potential problem is to compare credit growth with that of the economy as a whole. Again, this comparison reveals no problem. In fact, it shows credit growing more slowly than the economy, which may be a problem, but of a completely opposite nature. 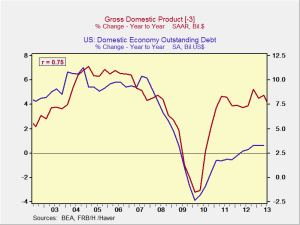 Reviewing the data, we see that the money supply—and credit—are not expanding at scary rates. Indeed, given the unexpectedly low levels of expansion, we might be, as the Fed is, more concerned about deflation than inflation. And yet, inflation has continued, albeit at low levels. Why? And what is the effect of the Fed’s balance sheet expansion? Can it be ignored?

These questions bring us to the core issue in examining whether the Fed has actually been good at managing scarcity, or just lucky so far. They can also provide context for understanding if and when inflation is coming, and what to watch for. We’ll take a look at that tomorrow.