That headline should give you a hint about the contents of this post. Now that we’re well into earnings season, I thought I’d take a look at how we’re doing and what that might mean going forward.

First, a bit of context. Earnings estimates, being estimates, change over time—usually downward. Dr. Ed Yardeni, a terrific economist and market analyst, regularly presents charts like the one below on his blog. You can find the original here.)

If you look at the green line representing Q3, which we’re now reporting on, you can see a significant decline in expectations, with quite a bit of it coming in the third quarter itself. This is consistent with what happened in past quarters and, although it’s not on the chart, in previous years. Analysts typically overestimate earnings, then adjust downward.

This is relevant because the first item on the FactSet earnings report for last week was that 75 percent had reported earnings above the mean estimate. That mean estimate, as you can see from the chart above, is well below what was expected only three months ago. So, while earnings may have beaten the updated expectation, they’re probably still below the expectation of three months ago.

Nonetheless, a win is a win, and the market has ticked up. The same will probably happen next quarter as well, but there’s an interesting dynamic in play here that warrants a deeper look. For the past several quarters, there has been an ongoing expectation that earnings growth will pick up substantially in the next couple of quarters. Instead, it has actually been slowing, per the following chart, again from Ed Yardeni’s site. 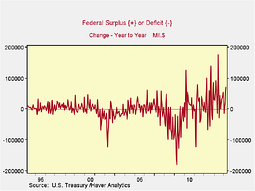 You can see the higher expected growth in the next quarter, as well as the decline in actual growth over the past several quarters—in distinct contrast to the higher initial expectations for those quarters, as shown in the previous chart.

The ability of earnings to meet expectations for both this and next quarter depends on a couple of things. Last quarter’s earnings growth relied on the financial sector; without it, earnings would have declined overall, according to FactSet. Financials won’t be riding to the rescue this quarter, however. As of last Friday, the financial sector had the biggest shortfall in actual earnings versus expectations. J.P. Morgan was responsible for much of that, but SunTrust Banks and BB&T also had significant shortfalls. Someone else will have to step in. Materials and information technology have had the biggest positive gap so far, so they may be the sectors that support earnings growth this quarter.

Beyond earnings, we also have to consider revenue when we look at future expectations. While 75 percent of companies beat earnings, which are subject to more interpretation and adjustment, only 52 percent beat sales estimates, which are harder to adjust. Sales growth has also been declining, even after considering positive expectations, as the following chart from Yardeni Research shows: 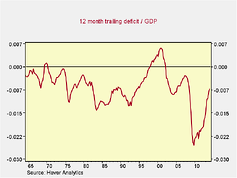 The net effect of decreasing revenue growth and expectations of increased earnings growth has to be higher margins. I’ve written about margins here before, and I won’t repeat myself. I’ll simply note that this will require margins to move even further into record territory.

As I said before, a win is a win, but the wins are getting harder to eke out each quarter. Success this quarter is largely a function of decreased expectations, and it looks very likely that next quarter will be the same. I remain nervous about a market that is continuing to wait for the Godot of higher earnings growth. That’s not to say it can’t continue—and from a technical perspective, it looks likely to—but the gap is getting wider.