To the surprise of many, the Federal Reserve decided yesterday to continue its stimulus program at the current levels, buying $85 billion of Treasury and mortgage-backed bonds per month. Not only did it opt to continue buying at current levels, but Chairman Bernanke repeatedly went out of his way to note, in the press conference afterward, that the Fed reserves the right to continue stimulus, no matter what the various metrics it had previously used as targets do. He seemed to be walking back much of the guidance he had previously provided, trying to make the Fed harder for the market to predict. With this action, he succeeded.

The decision to maintain the bond purchases was a surprise, as the market had expected some degree of reduction. As part of that expectation, markets took interest rates higher to protect against the possible consequences of the anticipated action. I’ve written about this before: as price discovery returned to the market with the expectation the Fed would start to exit, interest rates were bid up. When the Fed announced that it would, in fact, continue to buy the same amount, markets rushed to reverse their previous positions, driving interest rates back down and stock prices up. The unexpected decision led to a quick and relatively large adjustment in both.

While the effect of the news on interest rates and stock prices was positive, the signal for the real economy wasn’t good. For the Fed to maintain the current level of stimulus suggests that it thinks the real economy is weaker than is widely supposed. If that’s the case, employment and spending may increase less in the next several months than most people now expect.

The other big component of the Fed’s decision, based on the press conference, was concern about the pending budget and debt ceiling battles. I originally used this as an argument for no taper, over the summer, and the decision proved out along those lines. I continue to think this is probably the biggest risk we face in the near term. Today’s papers note that the Republican caucus in the House is specifically tying its budget proposal to cutting funding for Obamacare, which the White House will never sign off on. The prospect of a government shutdown—and potentially a government financial default—is starting to look more and more possible, and the Fed’s decision was certainly motivated, at least in part, by that fear.

Looking forward, it seems very likely that interest rates will remain at lower levels than in recent weeks and that stocks will continue to go up, at least for a while. How long that lasts depends on whether the Fed’s implicit prediction of both political turmoil and slowing economic growth comes to pass, and whether the market starts to take those risks into account more than it has.

The real drawback going forward is that the need to reduce stimulus, at some point, remains. The Fed’s head-fake to the markets this time around means that, when the need to reduce does become apparent, the ability to signal the markets will be impaired. Why should anyone believe the Fed next time, when it cried wolf this time? That increased uncertainty will make the ultimate exit both harder and potentially more turbulent. The additional bump in asset prices may also require more of an adjustment when stimulus is eventually removed. The S&P 500 has moved in tandem with the securities held by the Fed, as you can see below. The jump yesterday just confirmed the effect Fed policies have on the market, and the ultimate reduction will probably hit markets harder the longer it is delayed. 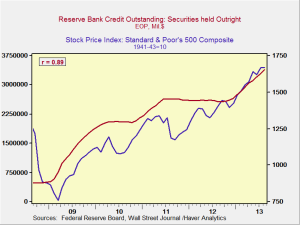 Overall, this is a short-term positive for the markets, but one that includes a number of warning signs for the future. For the moment, the party continues, but the longer it lasts, the worse the ultimate hangover will be.