In yesterday’s post, I discussed why I think both house sales and car sales are good indicators for the economy’s performance over the next 6–12 months. I went into some detail about the housing market and why I believe it will continue to support growth; today we’ll do the same for auto sales.

To recap a bit, anyone buying a car is making a long-term commitment, as well as a long-term bet on his or her own earning power. To be willing to make the commitment is to have confidence in the future. At the same time, since most autos are bought with financing, a lender must also have confidence in the future. Rising auto sales therefore reflect both consumer and business confidence, and are based on what people are really doing at a given point in time, without much room for interpretation or adjustment.

Looking at auto sales, we see the following aggregate information: 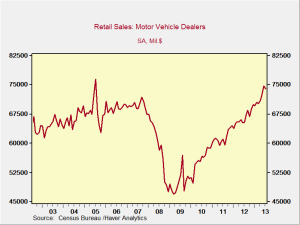 Dollar sales amounts have recovered to levels above those of the mid-2000s. Despite a downward tick in the most recent data, as shown above, we can still drop a bit and maintain a mid-2000s level. This is enough in the way of auto sales to support continued growth. Inflation in the interim has been low enough that the figures are still reasonably comparable. In fact, with inflation, sales levels still have further to increase to match the previous replacement sale levels.

Looking at the data another way, in terms of unit sales, we see a similar uptrend:

The unit sales figures have bounced around, with a decline at the start of this year, which can probably be attributed to the fiscal cliff, sequester, and tax increase. But, since then, they’ve consistently risen.

On a year-on-year basis, July 2012 to July 2013, sales in all categories are up by roughly 10 percent to 20 percent, with the exception of large cars (which posted a big drop), midsize cars, (with a single-digit gain), and minivans (with a small decline). In an article from last week, J.D. Power suggests that August auto sales may reach the highest level in seven years and set an all-time high in dollar terms, at around $36 billion.

The auto sales data therefore confirms the home sales data, which suggests that consumer and lender confidence remain high and should continue to support an economic recovery.

One more interesting way to review the data is to compare the two series, as shown in the following chart. 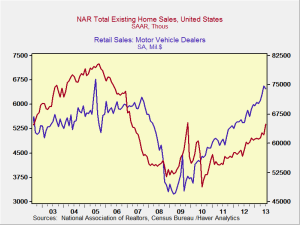 You can see that auto sales remained strong after housing sales levels started to decline, and that they started to recover before housing sales. This makes intuitive sense, as cars are both smaller investments than houses—people are more willing to be confident, since it is a smaller commitment—and have shorter lives. To use geek speak for a moment, you can consider the auto sales data as a higher-beta version of the housing data. Because of this, when the initial signal from one series is confirmed by the other, as it is above, we can have more confidence in both. (Note that both series show consistent improvement over the past couple of years, at roughly similar rates. Also note that these series provided a leading indicator of a deteriorating economy in 2007.)

Looking ahead, if a downturn were pending in the next six months or so, we’d expect to see housing sales decline first, followed by auto sales. At this point, that doesn’t appear to be happening. Given the pending risks out there, this could certainly change, but based on what real people—and real lenders—are really doing, it appears the recovery in the real economy is likely to continue for at least a while.