I’m meeting with the investment committee of one of our advisor groups this morning, and, in preparation, they sent me a list of very good questions they want to discuss. We’re also planning to start an “Ask Brad” section of the blog to address common questions. With both of these pending, and a couple of questions on everyone’s mind right now, I thought I’d start out with the big one, which is, of course, What are interest rates going to do?

Interest rates have moved higher again over the past week. What is driving the current spike in rates, as I’ve written before, is price discovery. As the Fed moves closer and closer to tapering away its bond buying, the market will increasingly be driven by supply and demand factors. In recent weeks, foreigners have been selling bonds, as have domestic banks. When and if the Fed starts to taper, demand will decrease even as supply is likely to continue to increase from the increased selling. When demand goes down and supply goes up, prices drop. In the case of bonds, this means yields go up.

Markets being forward-looking, we’re now seeing traders and investors trying to get ahead of this trend. We saw the same thing earlier this summer, when Ben Bernanke appeared to be calling for tapering. That trend got interrupted, but this one seems to have more legs. With employment continuing strong and inflation moving closer to the Fed’s target, the economic argument for starting to taper is looking much stronger. Investors are now trying to determine exactly where prices and rates will settle under the new supply/demand balance.

There are two ways we can look at the problem. The first is with technical analysis. Using the chart below, it appears that we’ve already broken through the lower resistance levels, and the next one up is at around 3.6 percent to 3.7 percent—well above where we are right now. Therefore, there’s no technical resistance to a further increase in rates. 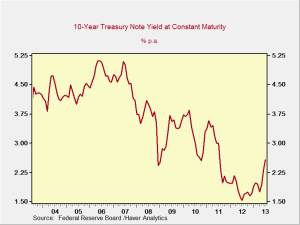 The other way to consider the future path of interest rates is to look at history and other available investment options. Starting with history, let’s compare the dividend yield of the S&P 500 with the 10-year Treasury rate, as shown in the following chart. 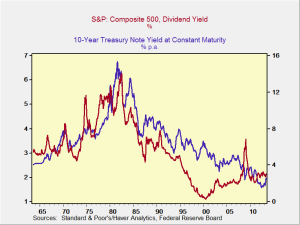 Since the 1980s, stocks have yielded less in dividends than the 10-year paid in coupons—until recently. The gap was typically a percentage point or two, except in the bull market of the late 1990s. If we accept that bonds should pay more than stocks, then we would expect to see Treasury rates go up another percentage point or two, which is reasonably consistent with the technical indicators.

Note, though, that in the 1960s and 1970s, as well as in prior periods, stocks typically yielded the same as or more than bonds because they were perceived as riskier. It certainly isn’t out of the question that the markets could revert to this, which would mean interest rates could remain around current levels. I don’t think that’s the most likely case, but it is something to keep in mind.

Another way to evaluate the likely path of rates is to consider other investment options, notably other sovereign bonds. As of this morning, both German 10-year bunds, at 1.86 percent, and British 10-year gilts, at 2.69 percent, are below U.S. rates. On the face of it, neither country is significantly less risky than the U.S., and there’s no apparent reason for the significant difference in rates. Looking at the alternatives suggests that rates might indeed tick back down, and that is what we are seeing this morning.

I don’t believe rates are going back to their lows, however. The evidence suggests that, over the next 12 to 18 months, we can reasonably expect to see rates continue to climb, potentially to around 4 percent, which would bring us back to the levels of the mid-2000s. The question is how quickly that will occur.

At this point, it appears that we’re searching for proper pricing, and the market has bid up rates as part of that. I wouldn’t be surprised to see rates decline again over the short term, but long-term history suggests that the trend will be up.

This is actually a good thing. Extended periods of low interest rates, while arguably necessary at times, have a record of distorting price signals and creating asset bubbles. The Fed itself has suggested that the current low rates have started to create a bubble in credit. Low interest rates also act as financial repression, costing savers, especially retirees, income that they had counted on.

For the past couple of years, we have heard a great deal about the risks of rising rates. Now that they’re here, we will certainly see those risks, but we should consider the advantages of higher rates as well.