August has been tough for the stock market. We’re now down a bit over 3 percent, even as interest rates continue to tick up. Based on the last time tapering hit the markets, we may have more downside risk ahead. 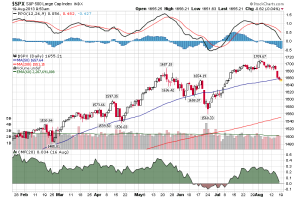 Technical factors also may be coming into play. The S&P 500 just dropped below its 50-day moving average (illustrated by the blue line above), which, as you might expect, is the average of the closing prices for the past 50 days. Different moving averages appear to act either as support levels—where declining prices, for example, bounce off that level and start increasing again—or as resistance levels, where the opposite happens. In the past couple of months, we’ve seen the 50-day act more as a support level, with several bounces.

The S&P 500 did drop below the 50-day in late June, which was a cause for concern. It stabilized quickly, then rapidly recovered, suggesting that the support remained. The fact that it was pierced, however, did result in technical damage. From a fundamental perspective, it also appeared that the resumption of support was linked to the Fed’s denial of any intention to taper immediately, which revived investor sentiment.

Technical factors mean nearly nothing in and of themselves, but they are valuable insofar as they reflect the sentiments of investors. Therefore, the S&P 500’s drop below the 50-day moving average this past Friday has to be analyzed based on how investors act subsequently. Unlike the last time, it doesn’t appear that the Fed will be weighing in to advocate continued stimulus. If the index recovers rapidly, then I think we can reasonably conclude the damage is limited, and investors can expect the market to continue to gain. If the index drops even further, that would warrant a closer look.

As I have written before, with stock prices increasing faster than earnings, the market’s appreciation has depended on investors’ willingness to pay more for a given level of earnings—a number referred to as the price/earnings ratio. When market price gains depend on fundamentals (on growth in earnings, for example), earnings are what you should look at. When, however, market price gains depend on sentiment (how investors feel), looking at sentiment makes sense.

The great thing about markets is that we really do have good data on sentiment—it’s called prices. There are other factors, of course, with volume being key, but price is one of the most important. When you see prices changing in a systematic way, you can reasonably conclude there’s an underlying change in sentiment over time.

Personally, I rely on fundamentals to determine what to buy and on technicals to guide me on when to buy. Buying when everyone else is selling makes no sense, although I might certainly buy at a lower price, when the selling pressure subsides. Similarly, momentum—that is, rising stock prices—is a known factor, suggesting superior future returns. I’ve also done studies that suggest using market trends, expressed as moving averages, can help limit downside exposure by selling when the trends are weak.

The fact that technical trends are, at a minimum, weakening, at the same time that fundamentals are weakening, indicates caution. The mainstream press is also starting to ring this bell, with “Beware Falling Profit Estimates” on the cover of this week’s Barron’s. (As a side note, I was very pleased to be quoted in the magazine’s “The Trader” column this week, saying pretty much what I’m saying in this post.)

Further, many other risks will be moving back into the public consciousness over the next several weeks—the federal budget and debt ceiling debate, Friday’s Indian stock market drop (the largest in two years), the German elections in September—also suggesting more volatility ahead.

None of this is to ignore the very real positive trends in the economy. It is to suggest we take a look at the price we’re paying for those trends—and the price other people are paying. If the signs indicate that investors as a group may be willing to pay less, that’s something we should be paying attention to.