As more or less promised yesterday, let’s talk about the market. Yesterday, we saw two interrelated events: interest rates ticked up again, and the stock market declined. Why? Will it continue?

Looking at the chart below, you can see that rates ticked up after Ben Bernanke’s initial comments, which implied that the Fed would soon start to cut back on market stimulus. Rates then drifted lower, with some intermediate spikes, as the Fed clarified that tapering wouldn’t start until economic improvements were seen—specifically, until employment and inflation met certain targets. 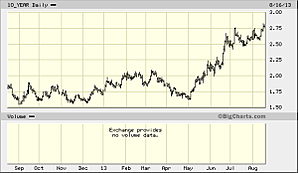 With the release of improving employment and economic figures in the past week or two, it’s becoming increasingly clear that the Fed’s conditions for tapering are being met—or at least getting very close. If you remember, several weeks ago, I thought the economic case for starting the taper in September wasn’t that strong and would be overruled by the pending political risks. The economic data since then has been much better than anyone expected, which makes the case for starting in September much stronger.

With rates now at the levels that prevailed in June after Bernanke’s comments, the market is back to pricing in a September start to tapering. Given the improved employment and GDP results, as well as higher inflation figures, I now agree that tapering is likely to begin then. In many respects, this is a very good, necessary thing—a long-overdue start to normalizing the economy.

For the stock market, though, it’s not such a good thing. After Bernanke’s previous comments, we saw a drop of 5 percent to 6 percent, which was recouped pretty quickly when he backed off. This time, with St. Louis Fed President James Bullard actually starting to discuss how the taper will be executed (rather than whether it might start someday), and with the improving data, the chances of tapering are much stronger—and the effects on the stock market are more likely to linger.

The rise in rates will hit stocks in a couple of ways. First, with rates higher, bonds tend to be more attractive, and stocks have to offer higher returns to compete, which means lower prices. Second, higher rates can be expected to dampen growth somewhat, which will hurt future corporate revenues. Third, as rates start to rise, the uncertainty in the entire financial environment will most likely push investors to start de-risking their portfolios, which usually means pulling back on stocks.

Adding to the problem is the generally weak revenue and earnings growth for stocks and the high present valuations. Stretched numbers are generally more subject to concern in an uncertain environment. The release of weak projections yesterday by two bellwether companies, Wal-Mart and Cisco, only underlined doubts about future earnings growth.

If we use the last pullback, in June, as a measure, there may be some more downside to stock prices. If the rise in rates causes investors to reassess their portfolios, it could easily be worse than last time. We’re also entering a historically volatile month for the market.

Overall, while certainly not time to panic, it is time to look closely at the risk levels in your portfolio, in all asset classes, and make sure you’re comfortable with both the short- and long-term risks you’re taking.