Several advisors have called me over the past couple of days, asking about various doomsayers predicting various forms of calamity. A dollar collapse is one popular theme; another is a collapse of the stock market, of “up to” 90 percent, according to one reported expert.

Make no mistake: I’m concerned about stock market valuations, as I have written extensively. It’s entirely possible we will see a correction, quite possibly a significant one. In fact, at some point, a significant correction isn’t just inevitable, it’s normal and even healthy. Let’s look at history. 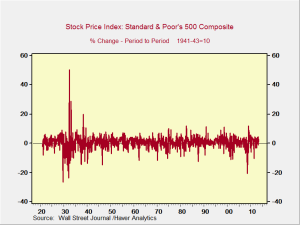 We can see that a month-on-month drop approaching 10 percent is actually pretty common through most time periods, averaging every 10 years or so (and more frequently in many time periods). Smaller drops of around 5 percent are even more common and appear to happen in most years.

The reason we consider such volatility abnormal is that most of us formed our expectations in the 1980s through the 2000s, where drops of this nature were less frequent. We did have some big ones—1987 and 2000, and, of course, 2008–2009—but overall, significant monthly drops were less frequent, as we can see in the shorter time series below. 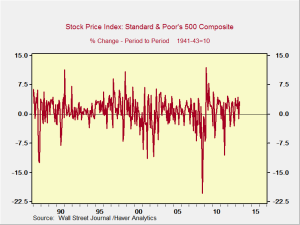 Looking at longer-term, year-on-year changes, we see that significant drawdowns actually aren’t that uncommon. Again, though, apart from the big crashes, they have been scarce in recent decades, influencing our perception of risk. 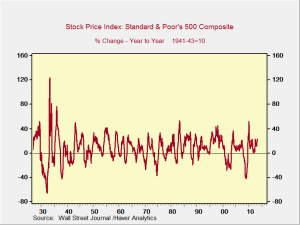 The takeaway from this data is that a decline in the market, even a significant decline of 20 percent to 30 percent over the course of a year, is historically absolutely normal—and probably inevitable over some time frame. Larger declines are less frequent but also certainly possible. If you look at history, though, those larger declines typically come in the context of global crises. They’re something to think about and prepare for, but not get too excited about. Consider New Englanders and blizzards. Every so often, we get hit really hard, but we know that ahead of time. If you’re well prepared, you can ride out the blizzard. If not, you’ll wish you had been.

From an investor’s viewpoint, then, this information is both invaluable (in order to prepare for the inevitable) and fairly useless (in that it will happen anyway). Unless you’re 100-percent invested in the stock market—which most people shouldn’t be—your returns will be different and probably much better. Historically, if you diversified into different asset classes, your results could have been better. If you diversified into different strategies within asset classes, your results also could have been better.

The point is, if you’re prepared, there are ways to mitigate the downside risk associated with the stock market. The fact that the market drops on a regular basis isn’t a reason to avoid investing; it’s a reason to invest intelligently.

For those who don’t have the time or the interest to study investing, that usually means hiring a financial advisor. Strategies and well-founded techniques can potentially mitigate many of the risks of investing. Helping keep the returns, and mitigating the risk, is what an advisor is all about.

Because—and this is the important point—the real risk to an investor isn’t declines in the stock market. These can, at a certain point in time, damage part of your portfolio. It hurts, but it shouldn’t be crippling. The real risk is losing your purchasing power over time. Stock market drops may cost you money in the short term, but purchasing power erosion is guaranteed to cost you money for the rest of your life. If you don’t invest, you’re guaranteed to lose money over time.

What I mean by this is that inflation will erode your purchasing power. At a 2.5-percent inflation rate, the Fed’s current target, you will lose more than 25 percent in 10 years. If you’re 50 and have a 40-year horizon, this means you’ll ultimately lose half of your effective wealth. In contrast, when the market has declined by 40 percent or 50 percent in the past, it has eventually come back. With a diversified portfolio, the damage should be less, even as you preserve your purchasing power over time.

None of this is to minimize the risks associated with the market, but they can be mitigated. And, at least in theory, they are compensated for by higher returns. You need those returns, because the risks posed by inflation, over time, are guaranteed.

The doomsayers’ focus on short-term risks is a disservice to investors. I actually agree with many of the points they make, in the short term, but I’m also aware of the longer-term risks. Humans are wired to react to the short term, which is what makes these people so scary. When listening to them, it’s important to decide if the risks they discuss are real and then to address them in a way that doesn’t make other, longer-term risks worse.