One of the problems with what I do is keeping everything current. The gap between when I prepare a presentation and when I give it can sometimes lead to awkward results.

For example, Commonwealth’s Research group holds a quarterly call for our advisors, where I typically talk for 10 minutes or so about the economy. Recently, I had to use lines like “Well, that slide is no longer current. Things are better now, and here’s why . . . ”

Last week, I wrote that I expected the economy to improve and was pleased about the 1.7-percent GDP print for the second quarter, as it showed an increasing (although slow) growth rate. As I’ve mentioned before, statistics are a work in progress, with each release revised several times. In fact, the information that has been released since the GDP report suggests that second-quarter growth will probably be revised upward and that third-quarter growth will continue to accelerate.

Here’s a look at some of the good-news data:

First, the most recent initial unemployment claims, which came in at more than a five-year low—since before the financial crisis. One data point does not make a trend, but the movement is clearly down as well, despite some back and forth in the data and the weak economy in the first quarter of this year. 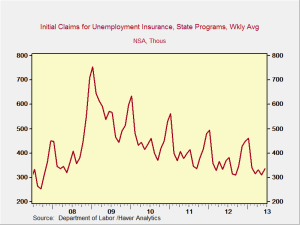 Second, the release of the manufacturing survey, which came in at a two-year high. Of particular interest, the surprise to the upside came exclusively from growth in domestic demand. Results this high typically indicate a higher GDP growth level going forward, of around 2.5 percent. 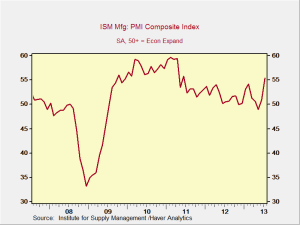 Third, the household survey measurement of employment gains, which, at 227,000, was a pleasant surprise. This deserves some context, in that the establishment survey results were somewhat weak, at 162,000. This wasn’t terrible, just not what was expected, but the stronger household results gave us a decline in the unemployment rate (from 7.6 percent to 7.4 percent) and in the underemployment rate (from 14.3 percent to 14 percent). Lower unemployment rates will continue to support growing consumer confidence.

Fourth, a rise in factory orders of 1.5 percent. This ties in with the manufacturing survey report mentioned above, as well as with an increase in manufacturing employment of 6,000 in the most recent employment report.

Sixth (and finally, for the moment), an increase in exports, which grew four times more than expected—2.2 percent versus 0.5 percent—while imports dropped much more than expected. This should result in second-quarter growth being revised up to more than 2 percent, along with supporting stronger growth in the third quarter.

One data point doesn’t make a trend, but when you have six, in different areas and all mutually supporting, it’s worth a look. Also worth noting is that these data points have all come in over the past week and are a mix of backward-looking results and forward-looking expectations.

All in all, despite the usual noise in the data, and the caveats—we’re not out of the woods completely—the signs remain good.